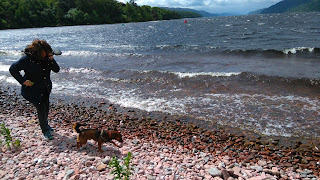 Although we are on holiday and not on our own boat, a wee blog still seemed fitting as we are busy watching other craft negotiate the engineering masterpiece (of Thomas Telford) that is the Caledonian Canal.

More precisely we are staying in Bona Lighthouse which was built to guide boats travelling north east from Loch Ness into the narrow channel leading to Inverness.

We are staying in the converted stables of the lighthouse which used to charge boat keepers for stabling their horses overnight. We look directly out over the magical, mystical and sometimes palpably scary, Loch Ness. A fact that we cannot avoid, with the trip boats bearing loud hailers and a reliable script echoing regularly off the lighthouse:

"You will see a group of little white houses over to your right. That is the village of Lochend. And it is well named as we are at the Loch end."

If that was a joke, no one ever laughed.
One of the little known stories of the area around the lighthouse, followed from an underwater "side sonar" survey. This revealed huge stone blocks and there was talk of discovery of a new underwater Stonehenge. It was close to being publicised when someone found that Telford (yes him again) on finishing building the canal, had dumped hundreds of tons of surplus stone from a dredger.

It is the end of June and the canal seems very quiet. I don't know how many lock-boat movements there are, but I would guess maybe 20-30 boats a day, with even fewer through the sea locks - as most of those are hire boats "doing the canal." We may do the canal one day. I thought it would be more expensive than it is, and on a quick look, it appeared less expensive than hiring a narrowboat,

One highlight of the trip is the local stag. He spends a fair bit of the day in the wheat field at the back of the lighthouse, but also wanders around our garden when he fancies it.

Last night, we took Jonesy for a romantic bed-time stroll on the shoreline adjacent to the stables, The Loch was like a silver mirror with dark shadows occasioning a slight chill in our bones. We were returning from the beach, climbing up a a slope up to the garden, but blocking our way and towering over us was the silhouette of Mr Stag, His magnificent furry antlers just visible against the night sky. 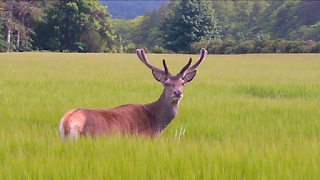 Jones was not happy. First mate took matters into her own hands as he appeared unbothered by a barking dog and two humans. She shone the torch, first directly at him, but he remained rooted to the path. Then she shone the torch up into her own face and he ran for his life. An impressive thing at any time of the day but especially awesome in the moonlight. We haven't seen him at all today and we are wondering if he was seriously spooked.

We are looking forward to taking Naughty-Cal up there next week. We considered hiring a boat but it would cost us as much as getting our own boat transported up there are back, plus we will also get a week on the west coast as well.

Hope Loch Ness is a bit smoother then in your picture though. We are hoping to spend an evening anchored in Dores Bay!