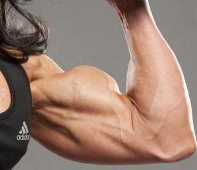 They told us the locks on the Stratford Canal were hard work. They were right. And the last five locks into Stratford were something different again. Reserves had to be called on to shift those bottom gates. First mate had the additional challenge of steering through the lowest bridges on the planet whilst bobbing down to avoid decapitation. The boat just scraped through with every morsel removed from its roof. On the plus side, Captain's Log shows that we have passed through 77 locks and we both feel that we are perhaps a little stronger than when we began the trip. First Mate is especially proud of her biceps shown here. She has now reclaimed her school nick name which went from Weedy to Wiry in the second year when the school bullies had to recognise that skinny didn't mean feeble and timid. 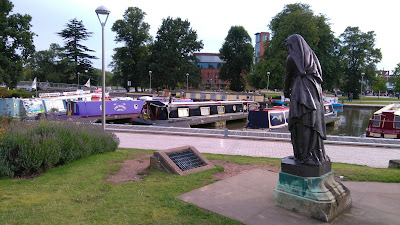 We arrived in Stratford on Thursday evening a day ahead of Schedule to gorgeous sunshine having been soaked through during the Wilmecote flight. How pretty everything looked. We even managed to get a table in The Bear at The Swan with Jones tucked underneath. We had great food which helped replaced some of the thousands of calories burned shifting sixteen locks. It being light until gone nine o'clock, Jones also got a run in the park after dinner and we re-acquainted ourselves with the little chain ferry. Walking back as it was going dark, we realised we could see the actors from the Royal Shakespeare Theatre changing costume on the top level of the terraced back stage building. They were illuminated almost as well as if they were on stage. One of them was stripped to waist briefly.