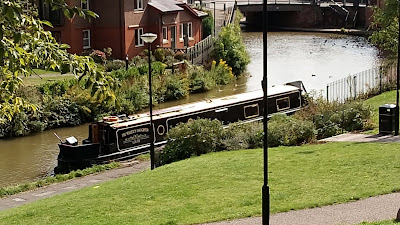 Our August cruise, which was mainly spent stationary, and sampling the delights of Chester, drew to an unforeseen early close.

The end to our journey was not how we anticipated it to be when we untied after five nights in Chester. But on a whim, a whim largely driven by laziness, we abandoned our plans to return to our mooring at Swanley Bridge, and instead put in to Tattenhall Marina, where having found an agreeable mooring, we shall stay for the winter.

Whilst we were in Chester, the summer subtly ended: There was a slight bitterness in the air, we found ourselves leaving restaurants in the dark, and for the first time in months, there was a fire in the stove. The reassuring constancy of the last few months had gone, and it was replaced with a reminder of what was to come.

With this in mind, and a forecast of wetter conditions, the relatively small number of locks facing us over the coming few days seemed more daunting than it should have, and so it was that many were left unassailed. No more to Bunbury or Beeston for us, nor would we rise through Tilstone or Hurlestone.

Perhaps five lazy days in Chester contributed to our decision. Either way, over time, a plan evolved to divert to where we are now: in Tattenhall.

The stove is in, and as we sit here drinking good wine, we can reflect on the summer, but as that vision of summer fades, the routine of survival begins again.