It might have helped had we known in advance about the "Whaley Water Weekend". As boating virgins, we made our plans in ignorance of this event, an event which would have previously passed us by. Anyway, there is a canal side festival with a name which puns on the acronym TW3. If you are really young, like Jemmathedog, and don't know what TW3 is, then just Google it.

Maybe the boating web sites we follow could put more effort in to publicising events such a this, and spend a little less web space annihilating CRT: Perhaps they (and we) should spend more time celebrating what we have?

Anyway, our plan was straightforward enough: Furness Vale to Whaley Bridge basin (for water) and then to the nearby visitor moorings and to the excellent Zayka (where we have been once before) tor a Goan meal (Jemma guarding the boat and enjoying a can of Butcher's Tripe.She isn't keen on Indian food).

"Are you trying to visit the mayhem at Whaley Bridge?" someone shouted from the towpath.
We must have looked a little like people who do not speak the language.
"Make sure you visit the cheese boat," were his last words as we sped towards the mayhem. A boat made of cheese? Whatever next?

The thought of reversing from the "mayhem" of Whaley Basin back to the Bugsworth junction made us nervous, so First Mate was sent ashore at the junction for reconnaissance.

A friendly boater stopped her in her tracks, reading her mind apparently, and said that there was mooring space after the Tesco bridge and reiterated the advice to visit the cheese boat. You can't turn around in the basin, he also said. 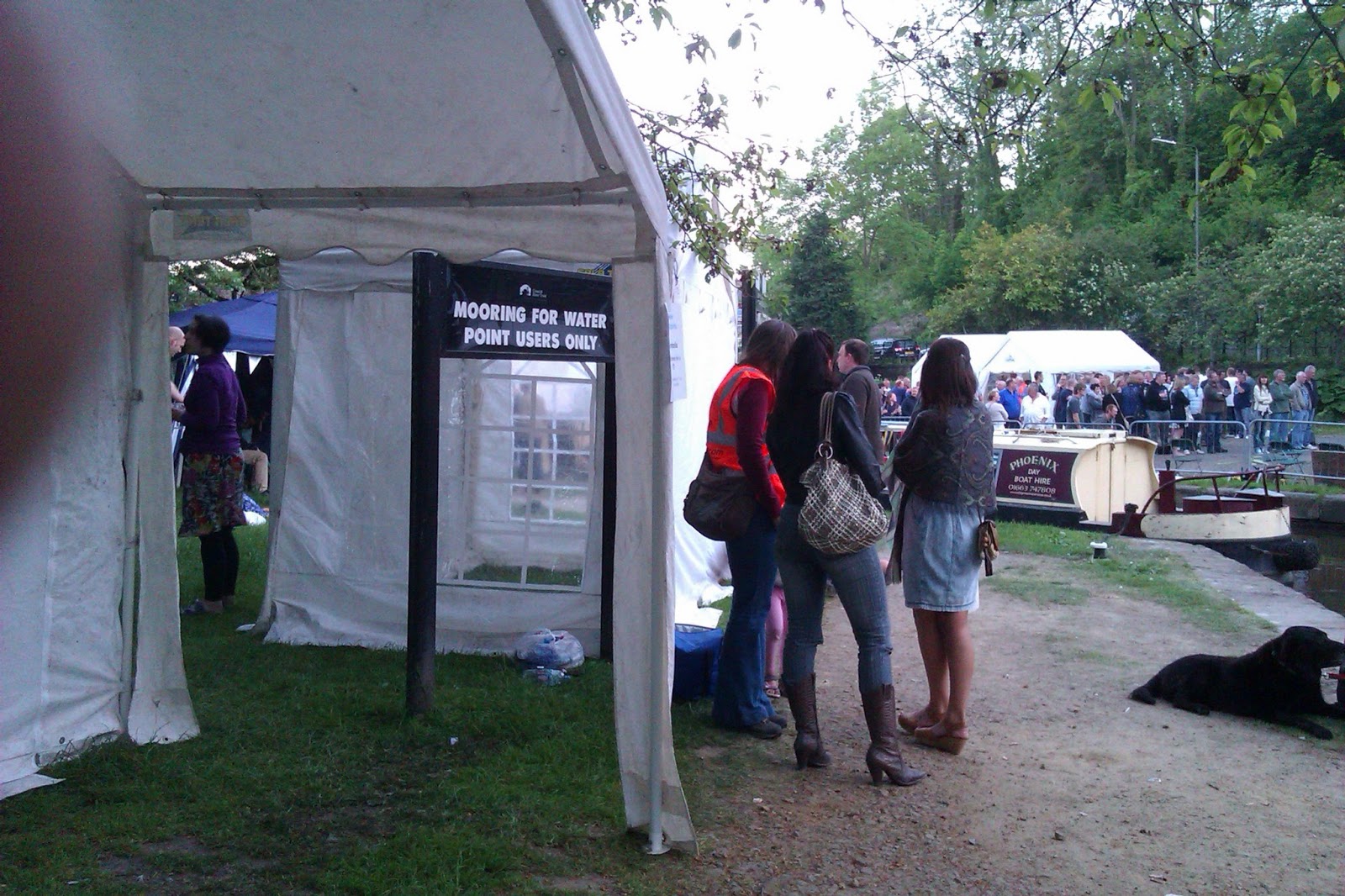 So,we gingerly we made our way to the 200 yards of "permanent moorings" beyond Tesco (where no one has ever permanently moored). We fought past 3 or 4 trip boats on the way (one had Johnny Depp on it - honest), and discovered that on this stretch of the canal, you can float quite close to the edge! Quite a novelty for the Macclefield and Peak Forest canals.

At our mooring, there were signs of people flowing away from a big old party. The towpath was very busy with families, balloons, and children with tiger painted faces, so after testing the new front bench cushion with a glass of Pinot Grigio - and which more importantly, was given the paws up by Jemma, we ambled into W3.

Sadly, we were a little late: the cheese boat and many stalls (especially the foody ones) had gone for the day. But we enjoyed an ice cream and sat in the sun across the canal just as the first band of the evening kicked off. The music was grand, beginning with rousing folk ensemble and finishing just after ten with a thrashy heavy metal band. Something for everyone.

The three day event was blessed not only by the visit of Jemma, but by the weather, and Whaley was buzzing. Someone did say that it was the first time in five years that the sun had shone. We couldn't visit everywhere that evening, but there was live music in the Goyt Inn, The Railway, and the festival tent. And every other house appeared to be licensed (?!) When we arrived at Zayka, the Chef was outside on the street with a traditional clay oven cooking fluffy nan breads and selling kebab type things to passers by. We admired the food and the enterprise.

The meal at Zayka was excellent. Goan food is new to us and it is so very different. Lots of fish and much more delicate in flavour than the usual Anglo-Indian cusine. Zayka is a now a favourite, as is W3 which is now in the diary for next year.

On Sunday, on our return, we met up with Brian and Ann Marie. They are such a hard-working crew. We seem to see them every time we are out, providing some vital service or other to the many boats on their stretch of the canal. What we would do without them? And we love to see Alton, the gentle giant loaded with coal and diesel, skilfully navigating the tightest of spaces.

"You're not going to the mayhem at Whaley Bridge, are you?" we asked. 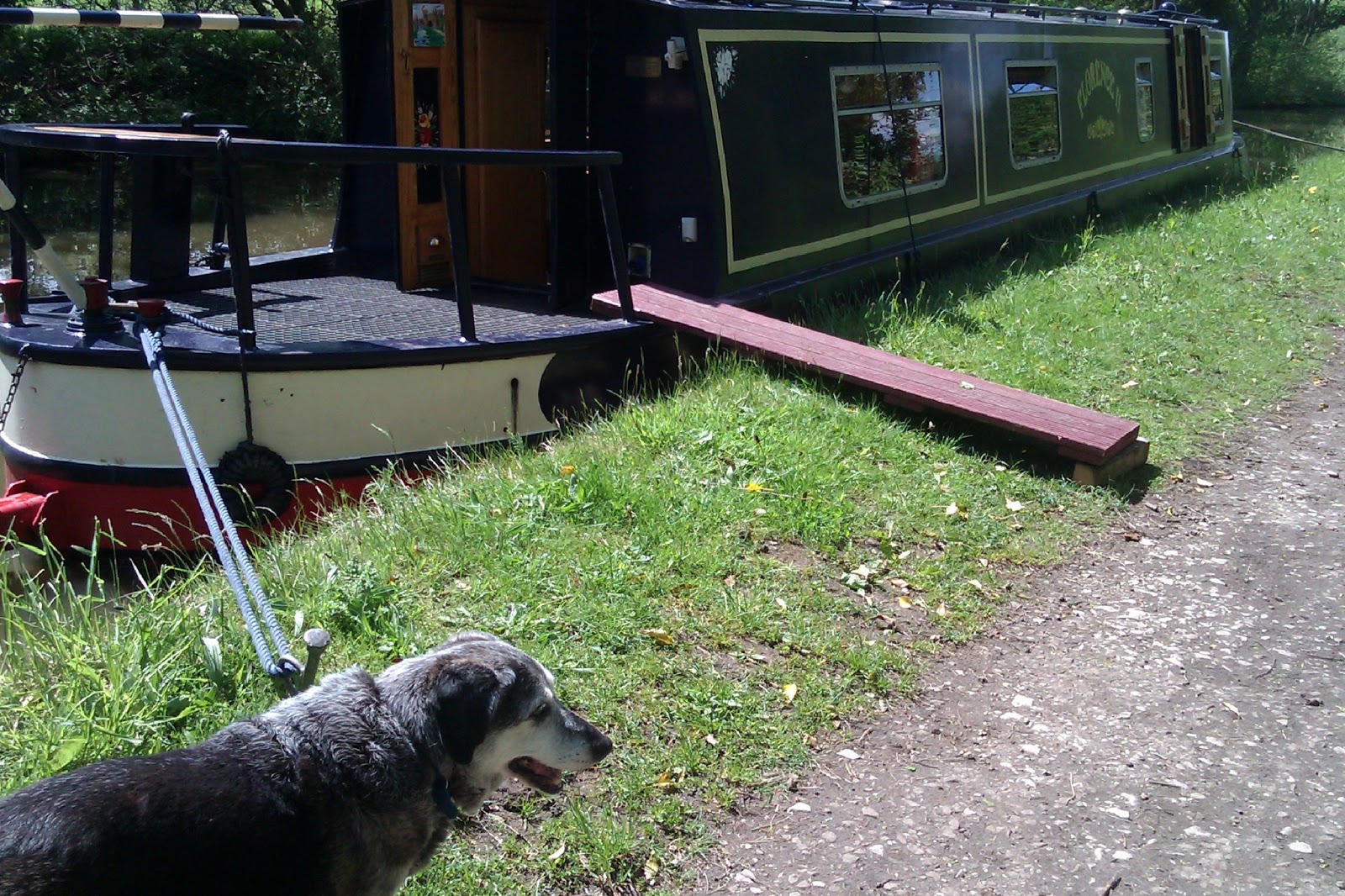 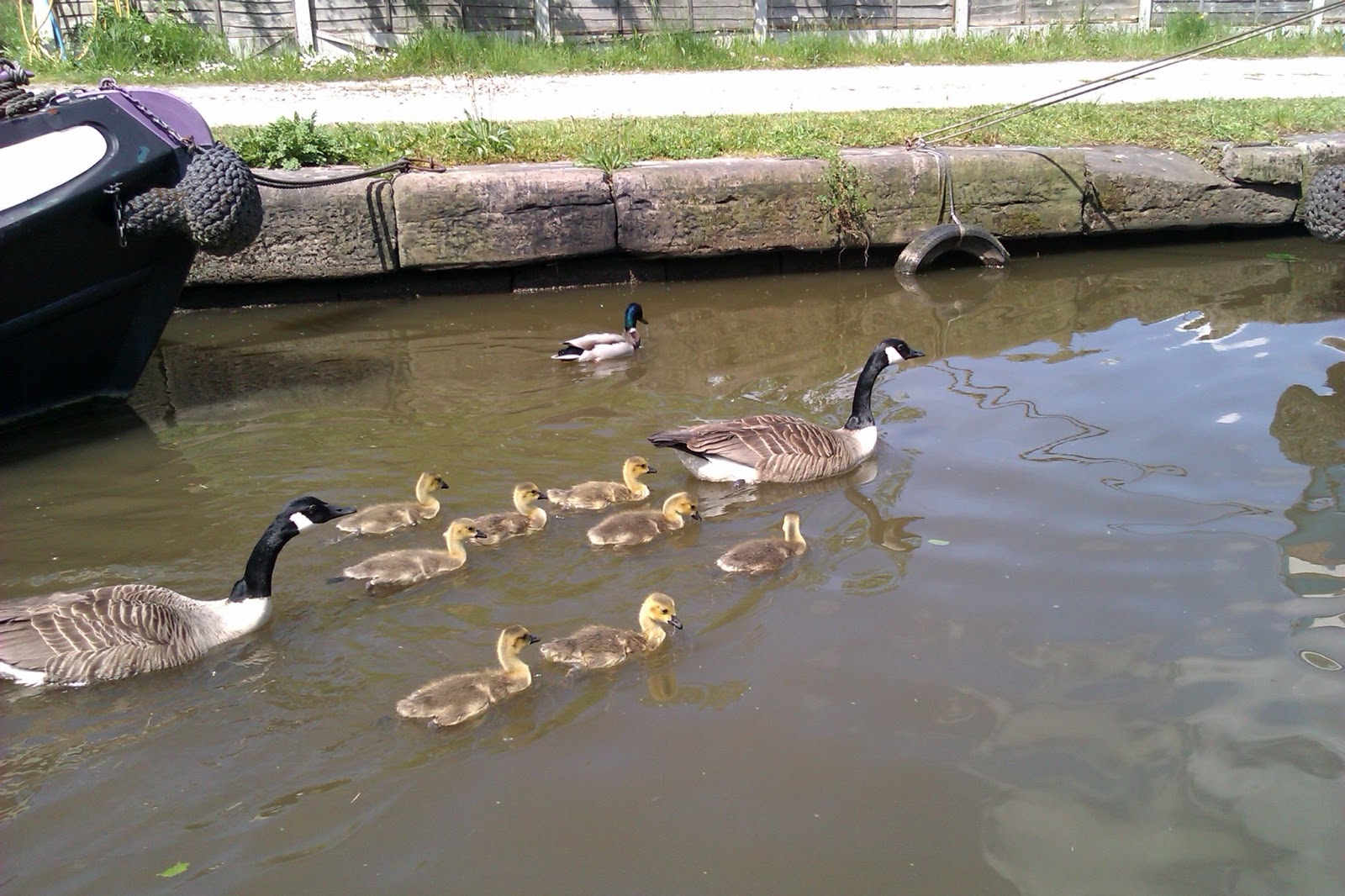 Jemma had a splendid time. As we cruised along, she kept herself busy patrolling the rear deck. First one side, then the other, then to the rear. Her efforts were successful as we arrived home safely. This despite seeing a father and son towing a plastic alligator head on a fishing line near High Lane. Perhaps it was the weather for it.
CLICK ON comments (RIGHT) TO POST A MESSAGE Jemma . June 02, 2013 No comments:
Email ThisBlogThis!Share to TwitterShare to FacebookShare to Pinterest
Newer Posts Older Posts Home
Subscribe to: Posts (Atom)