Lashed Opposite the Secret World of AstraZenica

We returned a day early from our long weekend trip to Macclesfield. This was partly due to the horrible weather and partly due to Mr Jones having a recurrence of his gastric problem. It was unseasonably cold and wintry for the cusp of June but the real decider was his second bout in four days of not eating and looking very miserable. We cut out the Marple detour for Monday and headed home to beat the high winds and get him to our vet in Buxton. 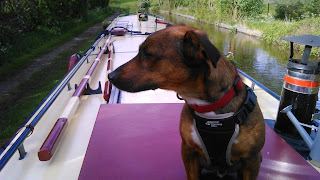 Our best day was spent with Dawn and Craig when the sun actually showed its face even if the temperatures were still only in single figures. We failed to pick them up, as arranged, at the new bridge 37 visitor moorings as they were full, so we met up outside the Puss in Boots, just beyond. We then cruised to the Gurnett Aqueduct, had a nice walk down the tow path and an early dinner at Sutton Hall.

In the early evening, we wended our way back to Macclesfield complete with  Prosecco served up in 1970s Babycham glasses. We dropped our guests at the same bridge so that they could catch a train back to Burton.

There were two young men sitting on the steps with a ten pack of lager. They smiled so we raised our glasses to them. Each to its own. We were decidedly squiffy tying up opposite the huge, imposing, secret and never ending factory called AstraZenica (and what in the world goes on there, we often wonder). Surely they must have filmed a James Bond movie with rockets, spies and baddies in this location. 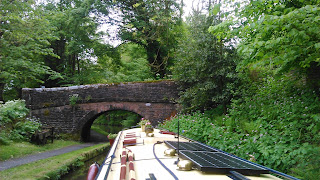 We wondered if we should have been drinking and steering but then we often see boaters with a beer and/or a large glass of wine and sometimes quite early in the day, so our cocktails after dinner were nothing out of the ordinary. It was all very very pleasant indeed.

However, the next day, as we cruised back into Furness Vale, spirits were drooping. It was freezing, we were all rain soaked, Jones was shivering, and we had the prospect of clearing out the boat and the stress of another veterinary intrusion.

Ah well, it can't all be wine and roses and we definitely did the right thing.
CLICK ON comments (RIGHT) TO POST A MESSAGE Jemma . June 02, 2015 2 comments:
Email ThisBlogThis!Share to TwitterShare to FacebookShare to Pinterest
Newer Posts Older Posts Home
Subscribe to: Posts (Atom)