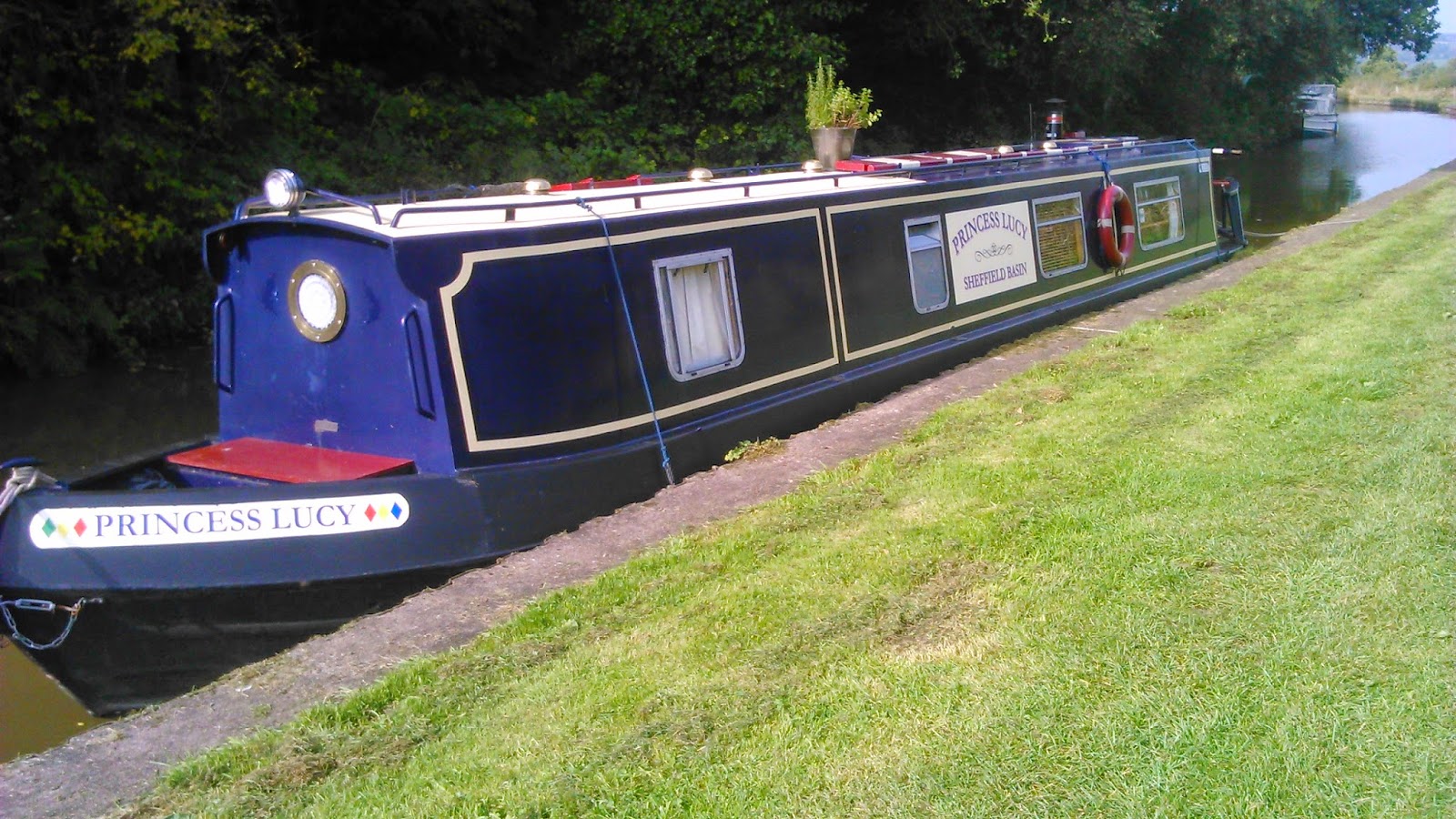 We trundled onto our mooring at Furness Vale early Sunday afternoon and said goodbye to Princess Lucy for a while. We hope to manage one night aboard in October before she has a galley refit which will take her out of action for a while.
CLICK ON comments (RIGHT) TO POST A MESSAGE Jemma . September 21, 2014 2 comments:
Email ThisBlogThis!Share to TwitterShare to FacebookShare to Pinterest

That was tha wurst fish supper I've eyver had!

On Monday, we had arranged to meet Chris and Hilda of the sea going yacht Scharjade. They came to see nb Princess Lucy and we promised them a good dinner at a canal side pub. The last time we ate with them was at The Seafood Bar at The Crinan Hotel. The two men declared that this was the best fish and chips they had ever eaten.

We returned to the Hollybush at Denford, and mindful that on our previous visit there, the food had been mediocre, we looked for something 'safe' on the menu.

"Fish and chips," first mate suggested, "they can't do much to ruin that."

Well they could, and they did. Chris had asked the bar person whether they battered their fish. The look of disbelief said it all. They didn't batter anything that could be delivered in a packet. Four portions of dry, triangular slabs of something battered were delivered. Luckily we could laugh about it. The parsnips weren't so bad though.

Yesterday we made fantastic progress for us from Hazelhurst Junction all the way to Etruria. The lovely sunshine helped. There is a lot of new house building around the canal, so we thought that maybe something is happening to regenerate The Potteries at last. We walked into Hanley for shopping and dinner but found the centre almost empty of people. The only visible change in Hanley since first mate left 8 years ago was a giant 24 hour Tesco plonked outside The Regent's Theatre. This lit the deserted townscape.

Today we travelled north through the Harecastle tunnel and decided that the novelty of this dark and chilling experience had definitely worn off. We literally counted the yards painted on the tunnel sides. It was a huge relief to be out in the fresh air and back on The Macc'.

Tonight we enjoyed an excellent meal and service at The Rising Sun, Scholars Green. Tomorrow is the Bosley flight and a quiet night in. At least we have got to end of all Scarlet's weeping, whining and wailing in Gone With the Wind. Like Rhett, by the end of this epic melodrama, we couldn't give a damn. 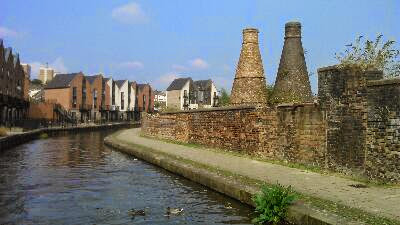 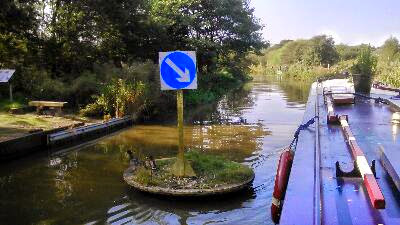 We went off plan yesterday when a Waterways guy told us a different route to The Hollybush. He said we could avoid any locks by taking the Leek turn and mooring on the aqueduct. So lovely is this part of the canal, that we decided.to continue for an hour along the Leek arm its terminous near the town.

There are few prettier detours even if you can't get anywhere. We moored at the end of the canal and walked through a scrap yard and industrial estate before climbing up into the market place. Leek is another silk town and full of interesting buildings. We shopped, had Prosecco in Getliffe's wine bar and curry at Pabna's. We were glad we didn't miss this experience.

Today we enjoyed an afternoon's cruise with the real Princess Lucy and her mum and dad. We tied up for afternoon tea and Lucy decorated cakes with icing, sprinkles and animals, finishing the design with fresh roses. Very classy. Look out Mary Berry.

Tonight is one of those rare dinners onboard and then "Gone with the Wind," a DVD we have had for ages, but not yet seen. 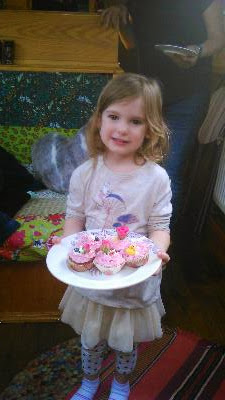 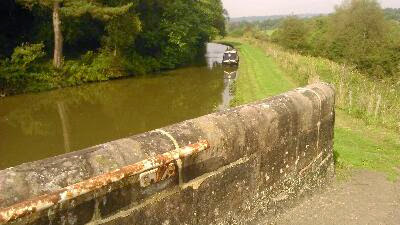 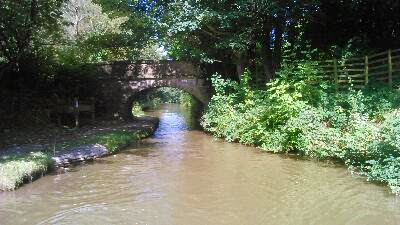 Since we last blogged, narrowboating has been very hectic. Tonight we are sunburnt in Etruria, and tomorrow the weather promises to burn us somewhere else. Our progress had been stunning (for us), perhaps it would be modest for others. But, to begin at the beginning.

We were in a rainy Marple on Saturday night moping about because we were missing Rocky. The weather cleared, we pressed on to Macclesfield where we hung around for 2 nights. We explored the town with its unusual and impressive architecture. Even Wetherspoons has Art Deco toilets. We had an excellent curry with visiting family in the old fashioned Pappadams. We noted that the dated interior with its heavy use of fabrics meant we could actually hold a conversation!

The next day we met our neighbours at the top of the Bosley flight. They helped us down the locks - in full sunshine. It was superb to be messing about on a boat.

Today we have done the Harecastle tunnel and cruised through Stoke which looked much softer than last time because of the sunlight and greenery. We returned to Middleport pottery and bought some plates, (Goldilocks size plates for the boat, that is - not too big - not too small).

Last night we moored near Buglawton, overlooked by a blue cow. Tonight we are moored in Etruria; watched over by a statue of a rather superior looking James Brindley. 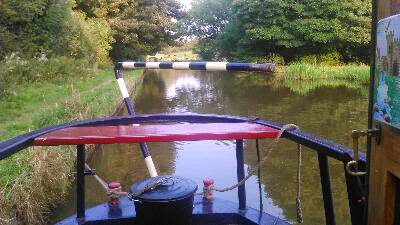 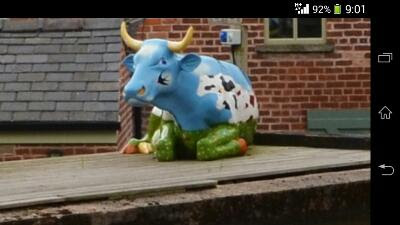 Carry on up the Caldon

We are beginning a two week trip where we might reach Cheddleton or maybe Leek.

Today we acheived our target of Marple in the pouring rain. Skillfully avoiding the Giant Hogweed at New Mills, we travelled the 2.5 hours from our mooring at Furness Vale. The new alternator appears to be working and the new set of domestic batteries look good. The following days which include a stationary day in Macclesfield, will test them properly.

There is a shadow hanging over this trip. We should have had Rocky with us pacing back and forth checking out all points from the stern. But for the first time in 30 odd years, we are "dogless." Rocky, the small greyhound, who has been with us for the last 12 months has left us for the beaches of the south coast.

We live in "sheep country" and Rocky's passion for sheep proved too stressful for both him and us, and after one sheep incident too many, we realised that he could not have any sort of life with us other than tethered to a lead. Which is no life for a breed built to run.

After some quick thinking by our friend Sarah of Chertsey, we came up with a plan for a new home away from the temptation of sheep rustling and the the very real threat of a farmer's gun. Sarah suggested that Rocky might do better with Jim.
So we are have having to get used to life without him. Jim phoned today to report that he is settling in to his new life quite well. He has new friends, new walks and Jim is clearly looking after him splendidly.

Tonight we are headed to Murillo's (Spanish restaurant).

No need to leave the radio or the light in for Rocky. 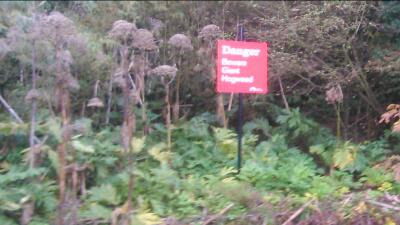