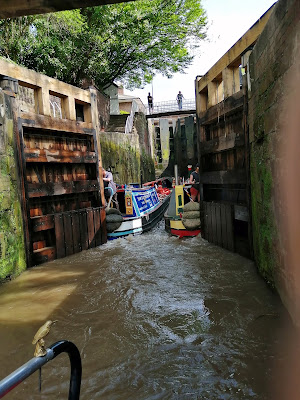 We have had nine glorious days basking in spring sunshine with temperatures in the mid twenties. We really didn't expect this good fortune for our last trip into Chester. Family helped us down the five locks into Chester and the real Princess Lucy was with us for a sleep over and found it all very exciting.

Neighbours joined us on Sunday night for dinner at Artichoke. In the morning we all enjoyed a remarkably easy passage down the staircase locks and into the basin for lunch aboard. The drop of the chambers is over 33 feet and the gates are imposing. It was reassuring to have the volunteer lockies managing the water flow.

They told us we'd be swapping places in the locks with six boats coming up. These were old working boats coming back from the 'Easter Gathering' at Ellesmere Port. Two of these were fuel boats Halsall and Bargus, boats that are actually still working.

The deep cutting and bridges which lead to the staircase are like something from The Corinthian Canal. 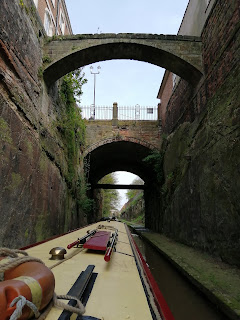 We left Chester today and breasted up through the five locks with a lovely boat called Marcellus who moors at Alvecote and who knew Chertsey: Sarah and Jim's boat. It is a relatively small world in the cut and you can get a glimpse into what it must have been like for the working boatmen and women who must have greeted everyone by name.
CLICK ON comments (RIGHT) TO POST A MESSAGE Jemma . April 23, 2019 No comments:
Email ThisBlogThis!Share to TwitterShare to FacebookShare to Pinterest

The last two posts concentrated on the Captain's recent midnight dip in the canal - and just to make it a tidy run of three posts, he has been at it again!

This time though was by choice. Before we set off on our Easter jaunt to Chester, we spent a night in the marina. After Jones's tea-time walk, captain thought it wise to check the electricity meter on the jetty, and he bobbed down to look. This was the moment when his phone slipped out of his pocket, and into the deep.

Now since the last tumble we have found all sorts of useful safety aids on the jetty: ladders, lifebelts, fire extinguishers, and so on.

Armed wih this new knowledge, captain slipped on some old painting clothes and positioned a ladder near where the phone might be. The marina, we now know, is about 4 feet deep,  and after padding around in bare feet for 10 minutes or so in 4 or 5 inches of muddy silt, nothing had been found. Captain was getting cold and starting to shake, but at the very moment he declared he was giving up, he stumbled across the phone.

The phone was ruined, but the Sim and memory cards were OK. Then it took a couple of days to fetch a new phone and get it up and running. Hence the lack of blogging.