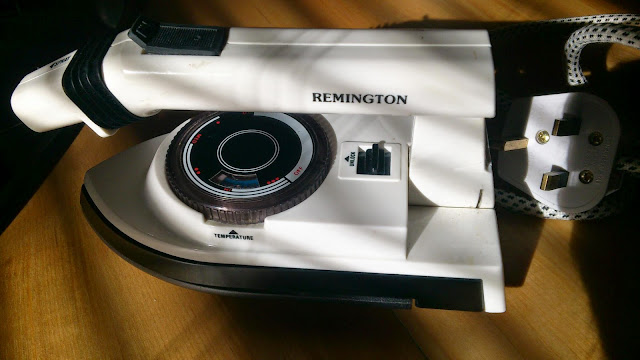 First the excitement of running the Candy automatic washing machine. Next came an experiment at ironing a cotton shirt. We are no strangers to the iron but have never gone as far as taking one on holiday.

However, when first mate saw a travel steam iron in a charity shop for a couple of quid - she figured there was not much to lose. Well it works and is really dinky. A second load of washing also proved that no ironing is necessary for 90% of stuff if you hang it on hangers immediately it has finished.

Lovely sunny day's cruising yesterday from Macclesfield to Marple. At the risk of using hyperbole, parts of the canal are stunning.

An extra spin and all dry

Yesterday morning the mist cleared to bright sunshine just in time for the arrival of family. We cruised a little way out of Macc, had lunch, spun around and then pottered back again. We said goodbye to them under Bridge 37, in the bridge-hole ... definitely an idiot proof plan if you don't intend tying up. 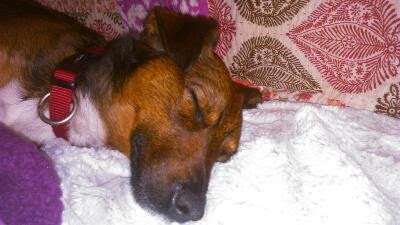 The sun continued and I think First Mate had a little too much, as before you could say Bollington, she was stuffing clothes in the washing machine. This was the first time we had used it for real, and we are both very pleased with how well the Candy Aquamatic performs, and how clear the instructions are. This is a pleasant change from our Bosch at home, the instructions of which are cryptic, or if you like, cr##.

We tied up for the night, in the quiet beyond Bollington, and Jonesy came off his lead properly (for the first time since his castration).

He seems very proud to be on his boat now, but it's not just us who are exhausted by boating, we have never seen Jonesy so whacked.
CLICK ON comments (RIGHT) TO POST A MESSAGE Jemma . April 07, 2015 1 comment:
Email ThisBlogThis!Share to TwitterShare to FacebookShare to Pinterest 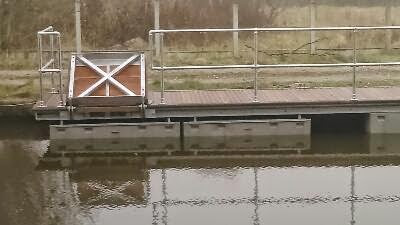 There are a just a few decent spots where you can tie up in Macclesfield, a town which feels generally unwelcoming to boaters.

So we were very excited when CRT announced there were to be 80 metres of new visitor moorings, and ready by the end if March. Surely we could squeeze on there?

Sadly not. The visitor mooring work on the canal has not even started. The moorings are there though. 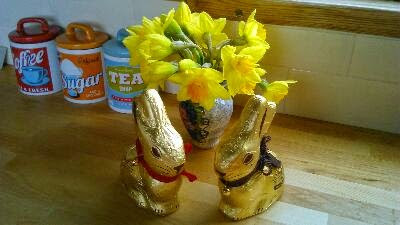 They are floating pontoon style moorings, and are bobbing about on the opposite side of the canal.

We were visited yesterday by captain's sister and her husband, and the sun shone as we cruised into Macc. We ate out at the splendid Sutton Hall, and although the plan was to get stinko, tiredness, colds, and possibly common sense, all dictated an early finish.

The bunnys survived Easter Sunday, but the clock is ticking and their decapitation looms.
CLICK ON comments (RIGHT) TO POST A MESSAGE Jemma . April 06, 2015 No comments:
Email ThisBlogThis!Share to TwitterShare to FacebookShare to Pinterest

Peace with the Geese 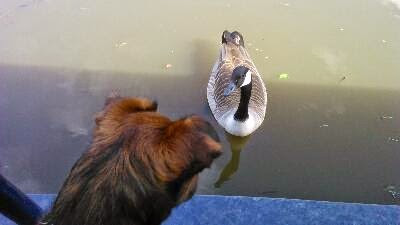 We made it. Four and a bit hours cruising and we are tied up close to The Windmill pub near Bollington. This is another first for Jonesy as we have booked a table for 2 and a dog. We were there with Rocky last Easter, and he wanted to make friends with every other dog in the pub.

Jonesy is still unsure about geese. He has had several very close encounters where his response has been poised between flight and fight. The result is a stable situation, which is good. 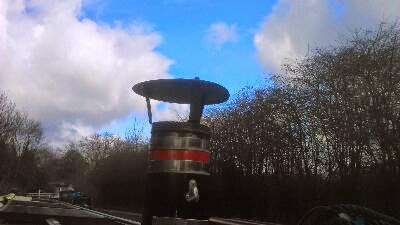 After yesterday, today was lovely sunny and calm. We stopped near Braidbar Boats for lunch and to buy some gunwale paint.

Tomorrow, we plan an under 2 hour cruise to Macclesfield, maybe to the new visitor moorings which should have been finished for Easter.
CLICK ON comments (RIGHT) TO POST A MESSAGE Jemma . April 04, 2015 No comments:
Email ThisBlogThis!Share to TwitterShare to FacebookShare to Pinterest

When one bridge closes... 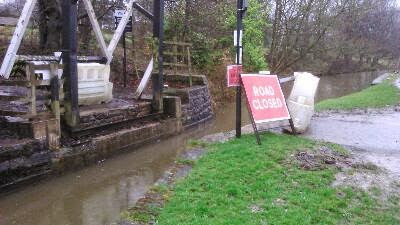 Tonight on the first day of our short Easter trip from Furness Vale to Macclesfield (or thereabouts), we have managed just over an hour's cruising. In the miserable very wet rain of this afternoon, that seemed long enough. And finding a spot to tie up wasn't easy either, as I believe the canal is being kept a good few inches lower than it should be.

It would have been comforting to get nearer to Marple, and past the site of the hole in the canal that has been temporarily bodged by CRT. Anyway, in the words of my old boss: We are where we are...  which is in fact tied up in sight of the broken Wood End lift bridge, which following an incident with a lorry earlier this year, is now deckless.

Mr Jones had been watching everything: Every duck, every goose, every passer by and every stick in the canal. Following the gales earlier in the week, there are plenty of sticks, not only for Mr Jones to monitor, but also for the Princess Lucy prop to chop. 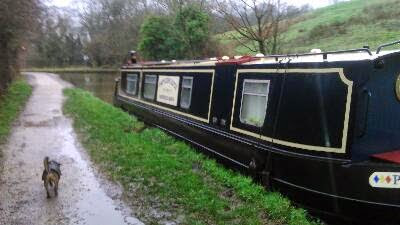 The jury is still out on whether Mr Jones will become a perfect boat dog. It's a lot for him to deal with. He is mildly threatened by Canadian geese but they are bigger than him and quite mean looking because they are nesting. He's on full alert and there has been a bit of barking but we'll see.

We tied up and walked the extremely muddy tow path for 45 minutes in pouring rain. Our spirits have been lifted by lighting the stove and pizza and wine. Tomorrow leaves us a daunting! 4 hours cruising, but with the promise of no rain.
CLICK ON comments (RIGHT) TO POST A MESSAGE Jemma . April 03, 2015 No comments:
Email ThisBlogThis!Share to TwitterShare to FacebookShare to Pinterest
Newer Posts Older Posts Home
Subscribe to: Posts (Atom)