Princess Lucy is lined with ash, and she looks very nice. However modifications and improvements are needed in some areas, and any new wood really needs to match the old wood.

Having searched the world for a local (and affordable) source of ash, and failed, I set about looking at alternatives. Staining or colouring pine seemed to be the obvious solution. The grain patterns are not too different, so it's just about getting the right 'colour.' The internet, where I fully expected to see a man on YouTube giving me the precise answer also failed me, so without boring you about the precise steps along the way, I will go straight to the answer. 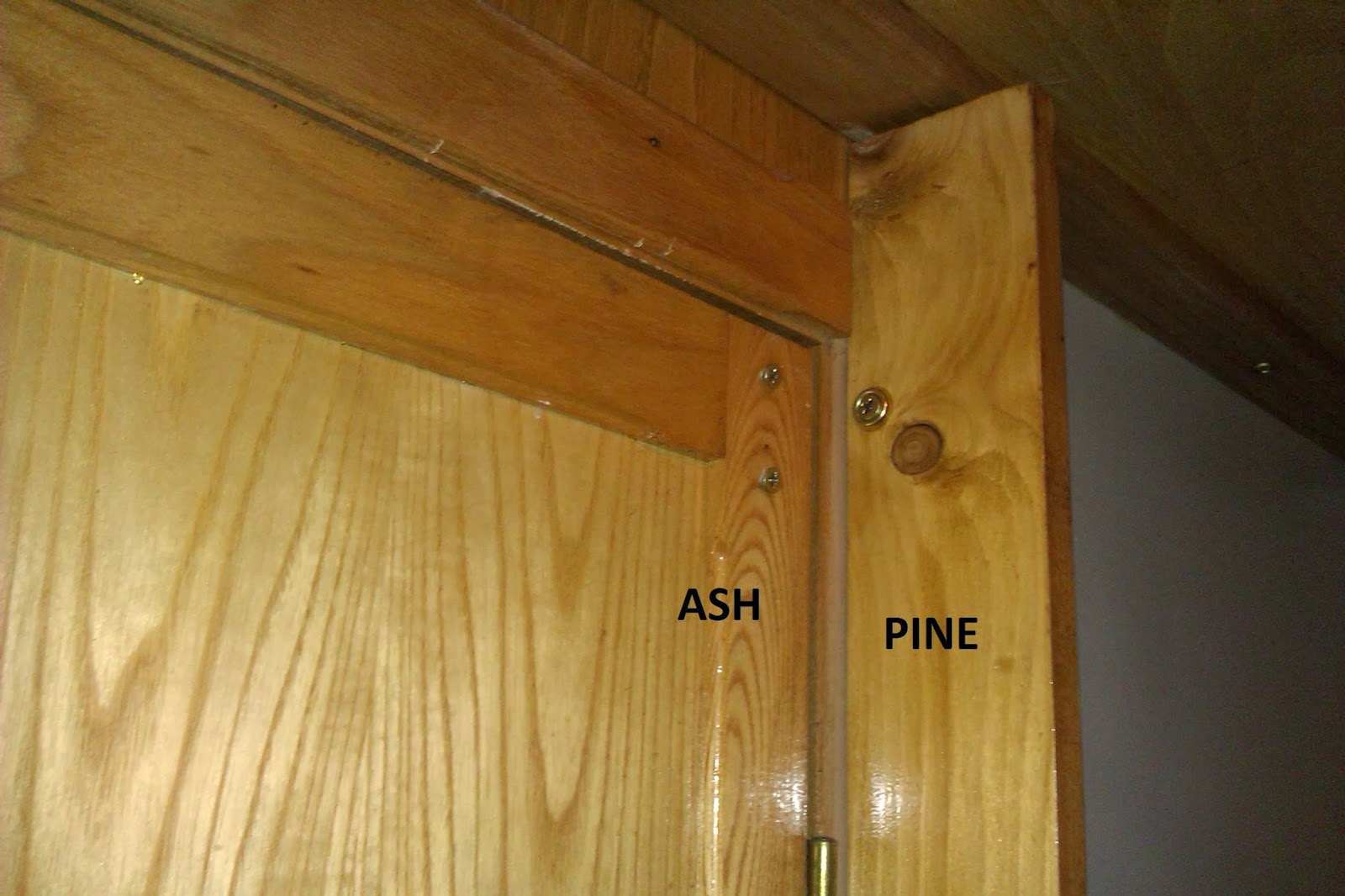 Coloured varnish was the answer. But Beech varnish proved a bit to yellowy or orangey, although fairly close, and Medium Oak varnish was a bit too grey and mucky, although again fairly close. The answer was a 50/50 mix of beech and light oak (I used Wilkos) followed by gloss yacht varnish.

The result (of a part of the new shower surround) is shown here.

Next week: "Lead to Gold" using 2H pencils from Woolworth's and a tin of Red Cardinal Polish.
CLICK ON comments (RIGHT) TO POST A MESSAGE Jemma . October 29, 2013 2 comments:
Email ThisBlogThis!Share to TwitterShare to FacebookShare to Pinterest

We decided to have a night away on the boat this weekend to see how Rocky would cope with eating and sleeping aboard Princess Lucy. More to the point, to find out how we would cope with 2 dogs with very different 'issues' in such a tight space. Jemma can't manage the steps and has to be lifted in, and out of, the saloon whereas it proved almost impossible to keep Rocky in. He really is a racing snake and slithered out of the front hatch in a nano-second but fortunately only ran to find the Captain who was in the process of ferrying things to and from the Landrover. When we got under-way to Whaley Bridge, we had both dogs up top and there was quite a tangle of leads and tripping hazards. It occurred to us that this may have been the first time that Rocky had seen water or ducks before. It was certainly his first experience of moving at walking speed.

The narrows proved a particular challenge as we tried to stop him from stepping off every time the bank appeared close enough. It's fair to say, that Jemma was showing off by playing the old sea dog (this is a complete lie as she has been the biggest pain in the neck up top before). We got to Whaley and had a lovely walk up the old railway incline and then fed them, got ready and went out for dinner. In spite of trying to wear Rocky out and putting on the radio, he barked and barked as we walked away. Fortunately we weren't moored near any other boats. 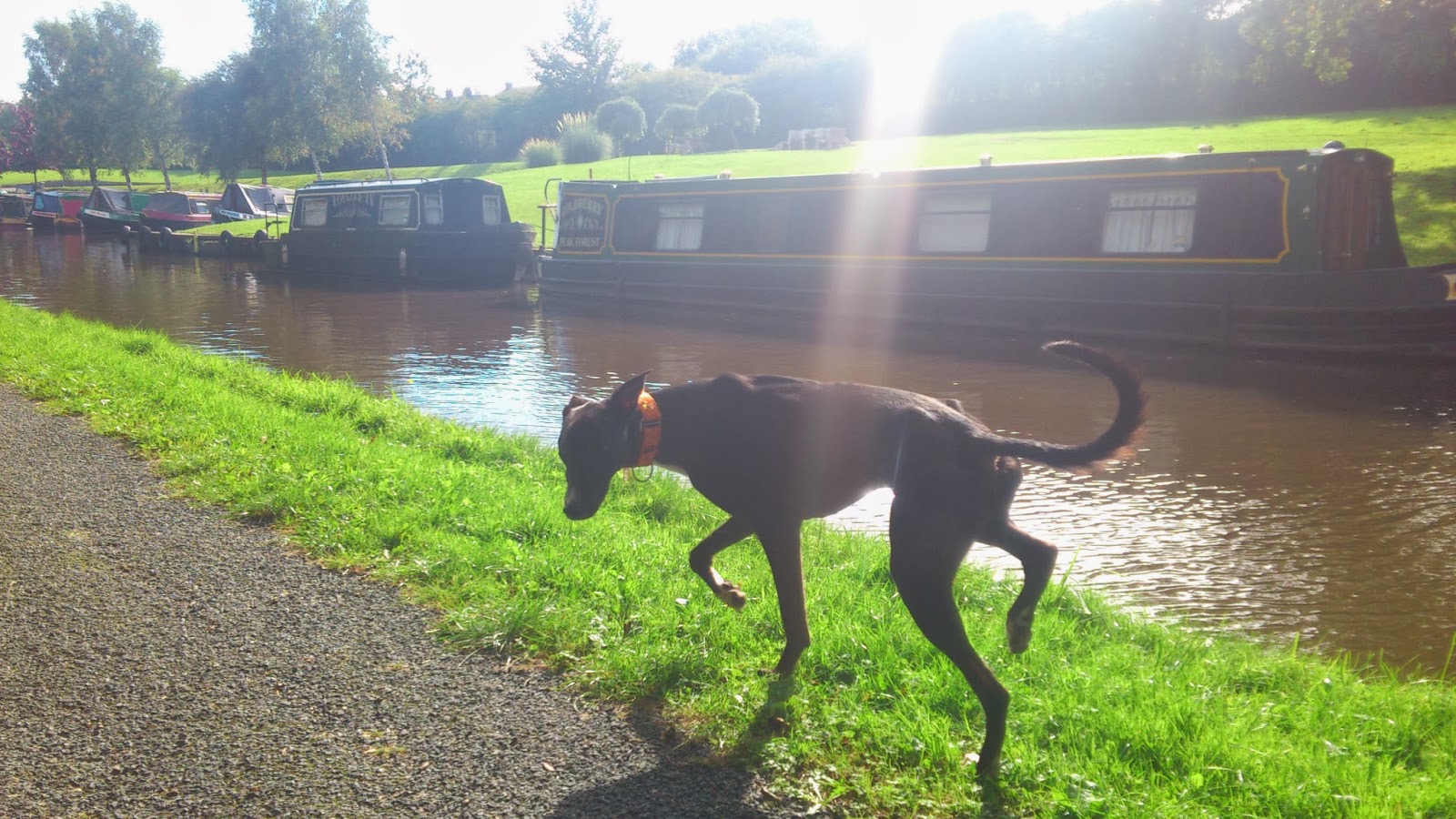 It was all a bit stressful and this was followed by a terrible dinner at Memories of India. There was a complete amnesia about the importance of good service. We waited well over an hour for starters, then nearly as long again for our main courses. By this time, we had drank most of the wine and were past caring about whether the food was good, bad or indifferent. The answer to the delays became apparent as we saw huge cauldrons of food disappearing outside followed by most of the waiting on staff. We guessed they were providing catering for an outside function whilst we sat waiting patiently for our meal in an increasingly deserted restaurant. We must have become invisible and trying to catch the attention of the one remaining waiter failed.  A long drawn out meal was the last thing we needed on the first occasion of leaving the two dogs on the boat. As it happened, they were fast asleep when we got back so there was no harm done. After a bedtime walk and cuddle, they both slept peacefully all night. 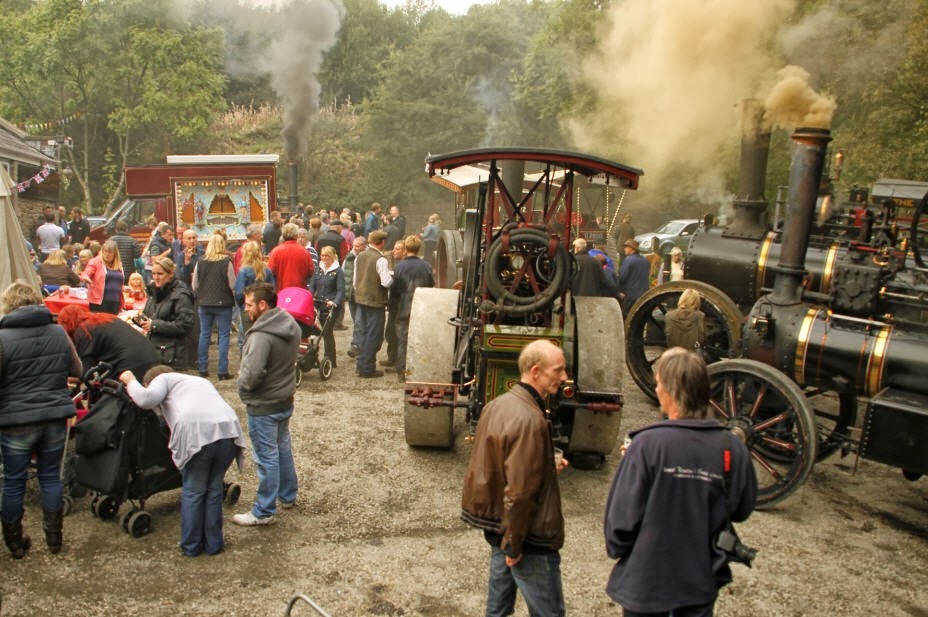 The next morning we woke to glorious sunshine and headed for Bugsworth Basin. As usual, we were in complete ignorance of the fact that there was an event on: this time a steam rally, and we couldn't find a place to tie up. We only wanted to go there to let Rocky have a run but it was very crowded. so we went back to Furness Vale. En route, we had never seen so many happy shiny people using the tow path for leisure purposes. Walking, jogging, cycling, ambling. We had pleasant discourse with other dog lovers who admired the new addition to our canine crew. One lovely little girl shouted at us from a bridge "Wow a boat and a dog!".

So all in all, not a bad first time cruising for Rocky. He even lay down in the sunshine on the Stern deck as we headed back home. Jem seemed happy to be the old hand who could show him the ropes. We viewed this performance with more than a little irony.
CLICK ON comments (RIGHT) TO POST A MESSAGE Jemma . October 09, 2013 No comments:
Email ThisBlogThis!Share to TwitterShare to FacebookShare to Pinterest
Newer Posts Older Posts Home
Subscribe to: Posts (Atom)