The Call of the Sea 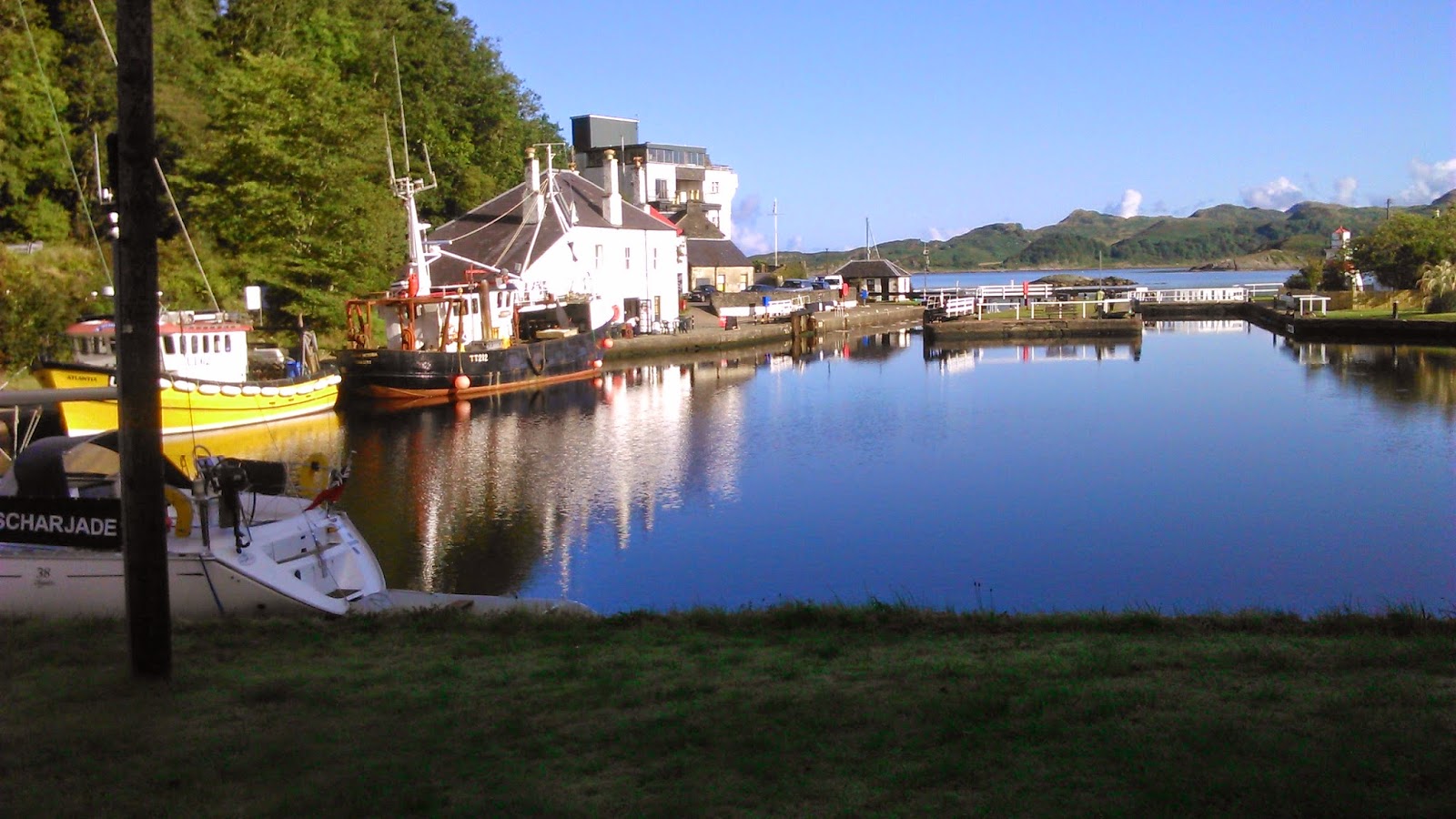 Last night, Saturday night that is, turned out somewhat different to how it was planned. The plan was to have a meal in our holiday cottage (smoked salmon, prawns, and spinach with fresh pasta). But that was not to be, and on a whim, "it will keep" I said, we shot across the lock to the Crinan Hotel Seafood Bar.

Battered Haddock for me, Arbroath Smokie for First Mate and and some bits from the table and lots of fun with friends for Rockie. Even the owners' dog, Fly, seemed happy to see Rocky. 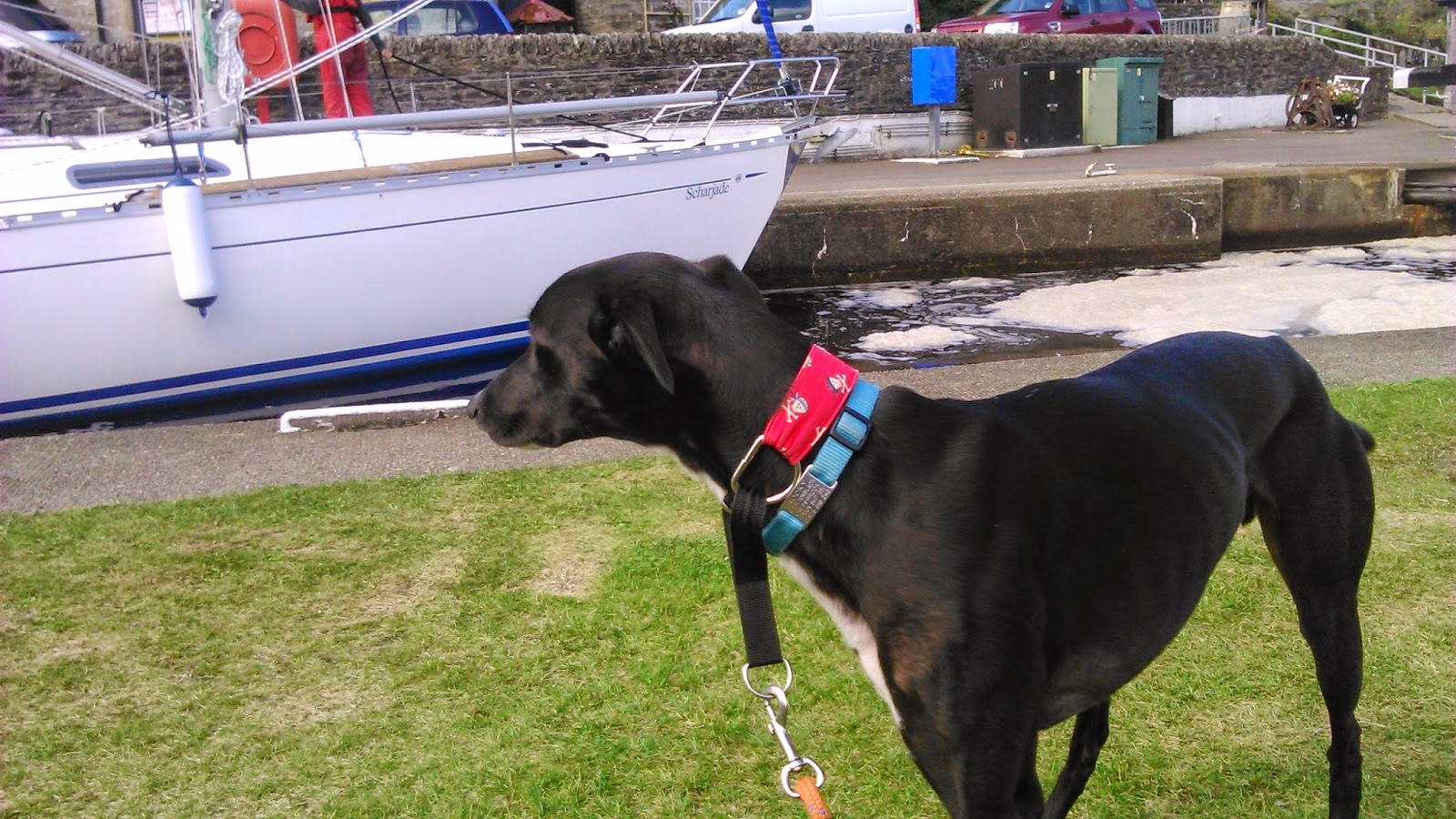 In the bar we met Hilda and Chris who were on a 38' yacht, moored in Crinan Haven for the night.  (For narrowboat people, a yacht is like the boat you draw when you are 6, with a pointy bit in the middle). They had brought this beauty all the way up from Lagos in Portugal to Oban. They had achieved this in stages over a number of years.

We thought that people with serious sea going craft would hold Princess Lucy in mild contempt, but it turned out that Hilda and Chris are seriously thinking about moving to narrowboating, whereas we, I now confess, have a serious attack of "the call of the sea." 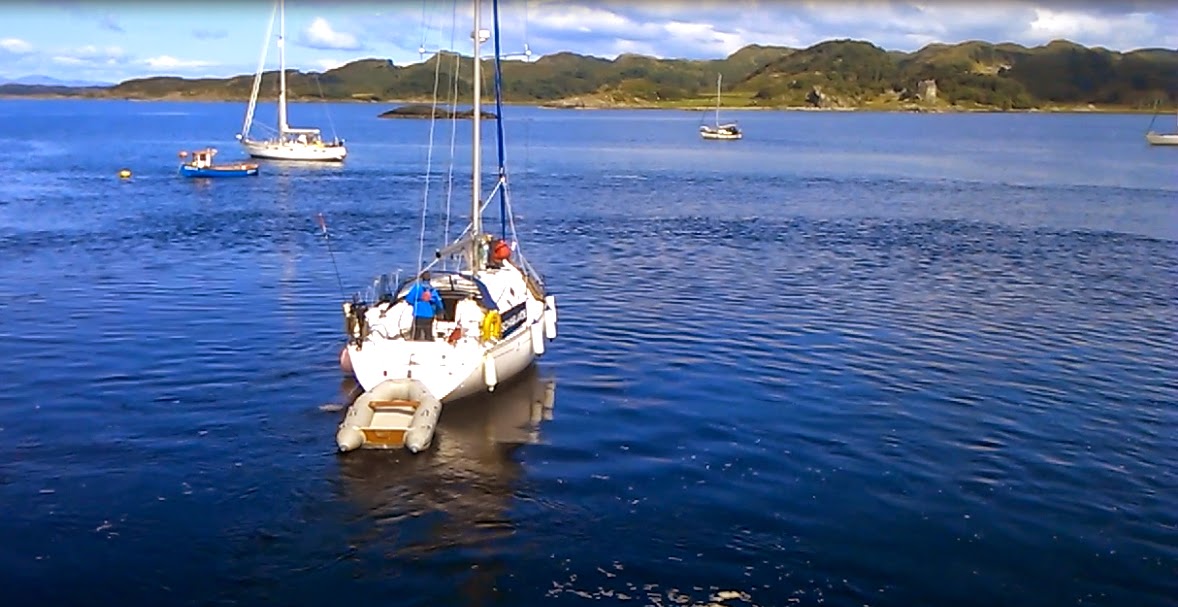 Well, drink was consumed, and we had a tour of the yacht (strange to see Waterways World on top of the navigational charts!) The drinking then continued in our cottage and there was lots of boaty chat including chat about toilet "issues" (pun intended).

We waved them off this morning in glorious sunshine in a flat calm sea (The Sound of Jura). I turned to First Mate, "I said those sails were no use."

Everything but a narrowboat 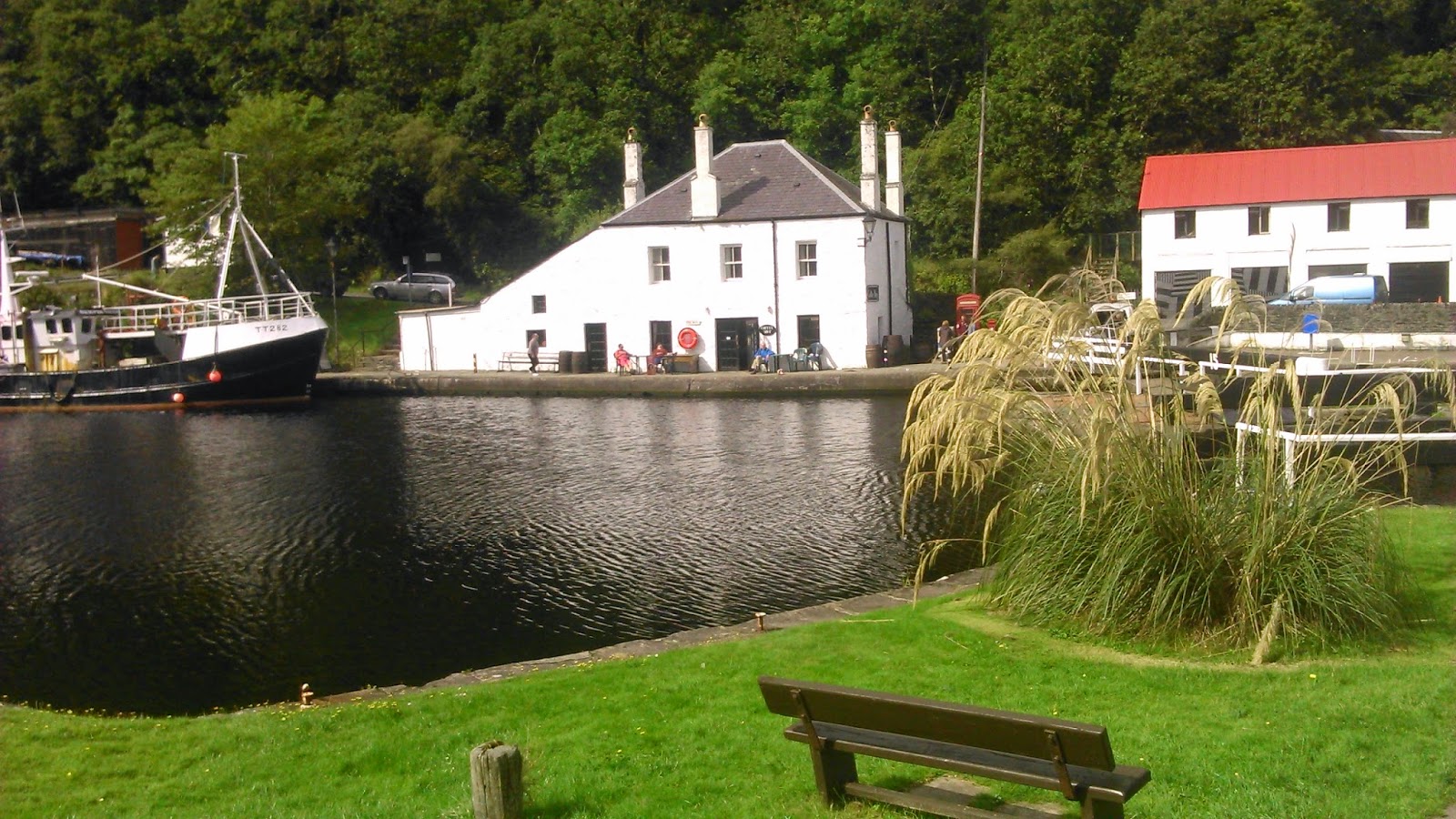 NB Princess Lucy is temporarily out of action. She is waiting for a replacement starter alternator to be fitted.

The alternator, it transpires, is quite rare, and to allow Nick from TW Marine time to sort one, we have taken to the car and driven a ridiculous distance north to spend a week in the former lock keepers cottage at Crinan Canal Sea Lock. 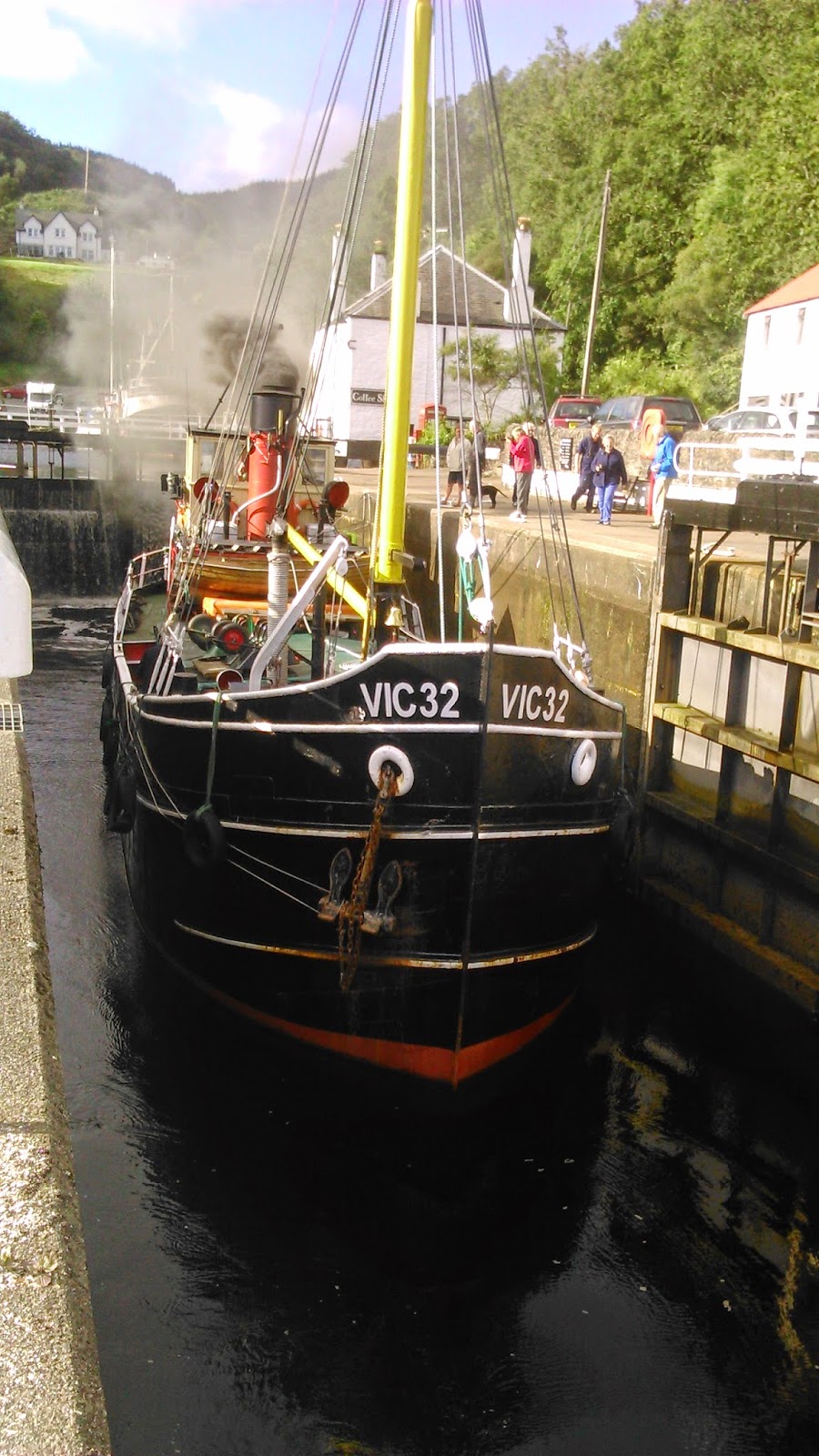 You can get all manner of craft passing through the sea lock at the end of the stunning Crinan canal on the West coast of Scotland.

We have constant and variable views of the craft passing through this most beautiful shortcut. We also happen to have a lighthouse in the front garden. Just today we have been entertained by an old Clyde Puffer leaving the basin and heading seaward to Fort William.

There were yachts of all shapes and sizes, swanky motor boats and at the end of a busy working day, the lock keepers had to stay late to help a tall ship, The Flying Dutchman, take shelter in the sea lock over night. That proved to be a monstrous job manoevering a big sailing ship into a tight space against a brisk wind. Ropes, inflatables and sheer determination brought this off. 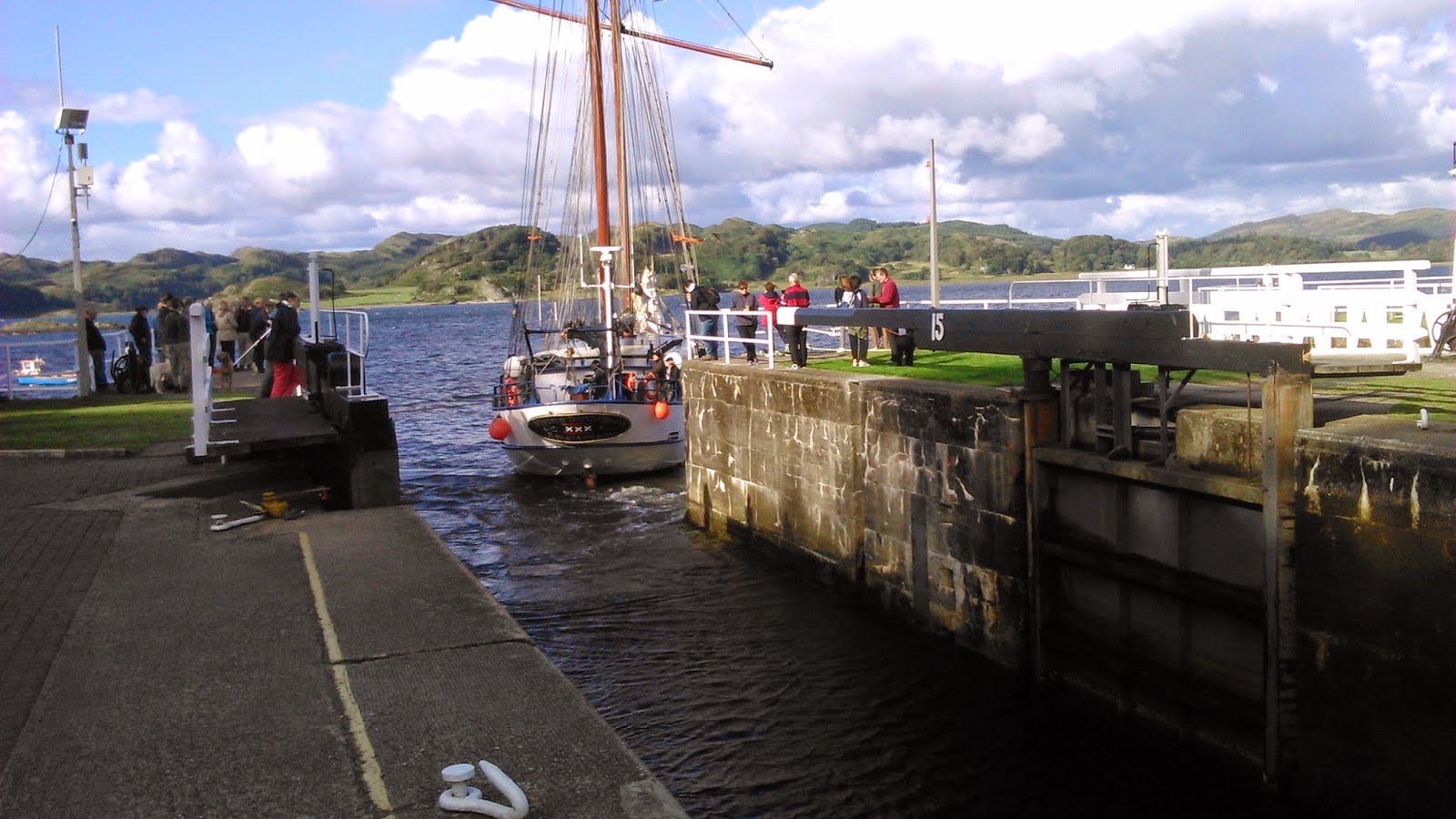 There will be more of our sightings soon. At the moment our internet connections are very iffy and we rely on hanging out of the window to connect to free wifi from the coffee shop across the lock.