The Answer is Blowin in the Wind 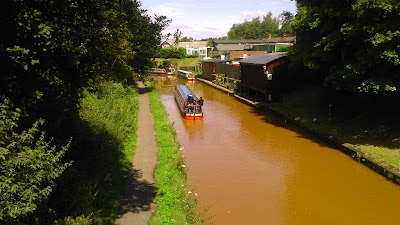 This is the first time we have attempted to go away for longer than two weeks. Our trip should last a month. We are reasonably organised and self sufficient but must face the problem of what to do about laundry. As a liveaboard confirmed, the issue isn't the washing, it's the drying.
Well today, we had the chance to put our eco-powered clothes dryer to the test. Using only sun and wind and some rigging in the side hatch, the washing dried. But then people have used this method forever. It's just arranging things on a small boat that presents the challenge. It worked well and dried a Candy load. 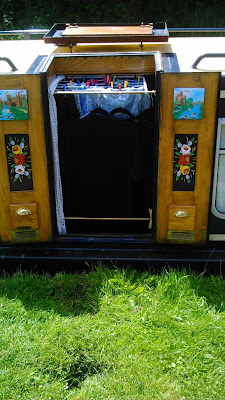 The only snag was, that we dare not leave the hatch open in deep locks with ancient walls that often leak. And as we did 13 locks today, the drying time was limited.
We are now tied up at Rode Heath ready to meet Leigh , Ali, and Lucy tomorrow. It's been a sunny day, we are pleasantly knackered and have had a good dinner aboard. The big dilemma of this evening is whether to try a night without wine. Surely there must be laws forbidding such nonsense? As the sun sets over the canalside reed beds and the moorhens cease their headstands, it seems wrong.
Something else that is wrong is that we have inadvertently tied up opposite a winding hole which is the canal equivalent of parking on a slip road. Captain has ventured out to see if we can move Princess Lucy to a more agreeable spot. It's almost dark and we are now moving backwards but for how long?
*Captain's note.
(1) Tied up nicely now opposite the Broughton Arms.
(2) When side hatch is open - also beware of CaRT strimmer men!
(3) Wine is poured. (I checked the rule book)
CLICK ON comments (RIGHT) TO POST A MESSAGE Jemma . July 31, 2015 2 comments:
Email ThisBlogThis!Share to TwitterShare to FacebookShare to Pinterest 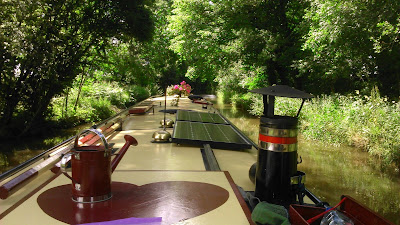 Today was an easy day. Woke up at nearly 10 with just 3 hours cruising ahead of us. We travelled from the River Dane aqueduct down to Hall Green. No locks, no bridges. Oh, and sunshine!
We got a little over excited seeing a sliver of blue sky. The side hatch was thrown open and the Candy washed washing, which was now able to be hung in the breeze and the sun, dried much quicker.
We have just eaten out, accompanied by Mr Jones, at the unremarkable (that is an understatement) Bleeding Wolf Hotel. Fish pie never looked or tasted like that before. We sat shivering in the conservatory by an open door. It is quite cool by now so we put the cork back in the wine, stuffed the bottle in Mr Jones blankie, came back to Princess Lucy and lit the fire. Shortly we' ll be opening windows and hatches, but for now it's fine.
Tomorrow we will start down the Cheshire locks The first 9 of them is the plan, as is to tackle Kidsgrove  Tescos to buy lunch for Leigh, Ali and Lucy's visit on Saturday.
We are now debating whether to open the chocolate mints. It's just a pretence though.
CLICK ON comments (RIGHT) TO POST A MESSAGE Jemma . July 30, 2015 No comments:
Email ThisBlogThis!Share to TwitterShare to FacebookShare to Pinterest 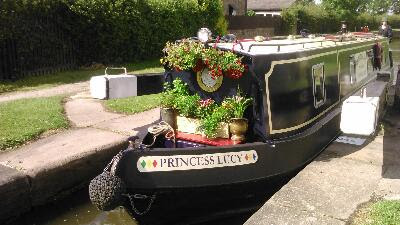 Today, we fought with the voices that proposed we stayed put in our bed all day. But we are made of stonger stuff, and when the fight was over, we set off from Sutton Lane, pretty much first thing, at 12.30pm.
For a change, the electric swing bridge at Oakgrove behaved, and then after lunch we dug deep for more strength, and after moving all our plants to the bow, for better visibility of locks, we set about descending the 12 Bosley locks.
The flight was serene, flower filled and beautiful as usual. When we were in Sutton Hall for dinner last night, a collection on the bar reminded us that Bosley, the village, was only recently the scene of a major industrial disaster. The details of which are reminiscent of Dickensian mill fires. Difficult to  contemplate such a tragedy in the 21st century. 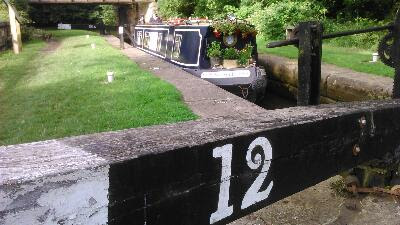 Mr Jones had never seen a lock before, and as we passed through the locks, we experimented with him (a) tied up near the lock (b) tied up on deck (c) in the boat with hatch open and doors shut. None of the options was especially succesful, but maybe (a) just came out as the least worst.
We are now tied up in late evening sun at the bottom of the locks and on the river Dane aqueduct.
As usual, all three of us are knackered. But only Jonesy is allowed to flake. We have fresh pea and mushroom risotto to cook for dinner, showers, and a fire to clean out before we can put our feet up.
Only then can we revel in the special type of fatigue you get when you've been out all day in the country air and sunshine.
CLICK ON comments (RIGHT) TO POST A MESSAGE Jemma . July 29, 2015 No comments:
Email ThisBlogThis!Share to TwitterShare to FacebookShare to Pinterest

Who has been sleeping in my bed? 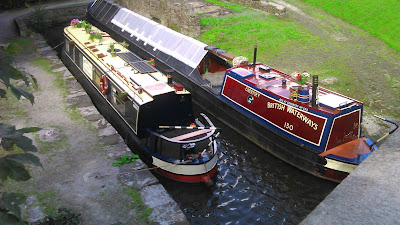 Our trip to Chester has now begun, although we started by cruising in the wrong direction.
This was so that we could spend two nights in Bugsworth Basin to celebrate Sarah's birthday (this is Sarah of Sarah & Jim and their boat Chertsey.)
It was also an opportunity to catch up with our ex-rescue, Rocky the greyhound, who last September we re-homed with Jim.
This might be a good point to explain about all the dogs in this story.
Our first boat dog was wise old Jemma, who started this blog. She passed away in March 2014. The September before that, we had rescued Rocky, but he proved to be too fond of chasing sheep, and we live in the Peak Disrict where they are everywhere. 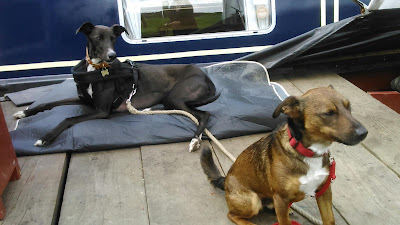 After twelve months of dodging the farmer's gun, we rehomed Rocky with Jim in Newhaven. We missed Rocky and Jemma terribly. So in February this year, having been without a dog far too long we rescued Jonesy. He is a terrier, who is settling in,  finding his paws, and being unpredictable.
So, Jonesy and Rocky had never met, but it all went fairly well - to start with.
Now trying to explain to Jonesy that his boat (Princess Lucy) was once Rocky's boat, didn't really work, and poor Jonesy must have been horrified when Rocky just curled up in Jonesy's bed. Having them both on our boat was perhaps a step too far? 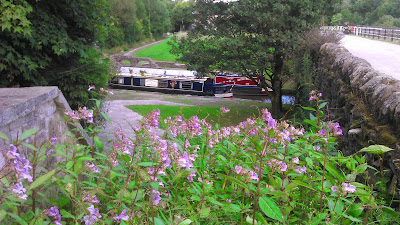 The second night though, following a tiring run around Bugsworth Basin, (the dogs that is, not us) we tried again, and this time they relaxed a little more and slept on the sofa.
This morning, in pouring rain, Princess Lucy set off in the right direction. As we passed through Marple, the rain eased and we tied up in countryside at High Lane shortly after.
4 hours cruising , filled up with water, pumped out, food shopping. All partied out and knackered. 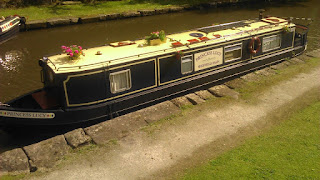 Princess Lucy is now ready for her summer holiday. She has been fettled and serviced and hugged. Her stern gland has been repacked and greased (with a sponge and a rusty spanner). Chairs and a folding barbecue have been stowed. And tomorrow she will have a little wash.

Now last summer's trip taught us one lesson: and that was that you do not want to be lugging heavy shopping (wine, beer, water, milk) any distance at all. We fell foul of this on the Caldon Canal where there are few villages, and what shops we found were unremarkable and distant. 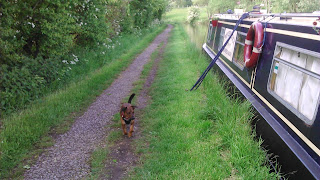 So given that the robust folding shopping trolley is yet to be invented, we are left with just a few other options (all of which will be employed). They are:

(a) Supermarket grocery deliveries. I have already identified one likely spot and set up a delivery address on our Ocado account. I am a bit nervous about this in case we don't get to where we need to be to meet the van, but we will see.

(b) Supermarkets bordering the canal. On this trip we have the relatively new Waitrose at Chester, Tesco at Whaley Bridge and the reasonably close Tesco at Kidsgrove.

(c) Now this option is one where I have excelled, and that is finding every hidey-hole on the boat that there is, and in it you stash said water, beer, wine and (longlife) milk. We now have 40 bottles of wine and similar numbers of bottled water and milk (most of the beer that will be drunk is in the pub.) 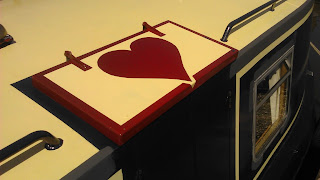 This year's trip is to be from Furness Vale to Chester - and back, and following recent experiences and the associated learning curve, we are aiming for little more than 3 hours cruising per day. 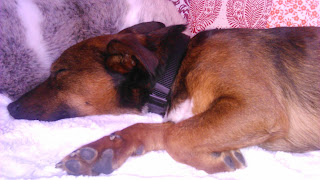 So we set off on Friday, although this is to be via Bugsworth Basin and two nights of parties.

I can feel the pressure!

P.S.  I realise there could be robbers reading this who may want to steal our wine cellar. Be warned the dog never rests!

[Blog title courtesy of The Smiths.]

["with a sponge and a rusty spanner" courtesy of The Smiths, from the track: The Queen is Dead.] 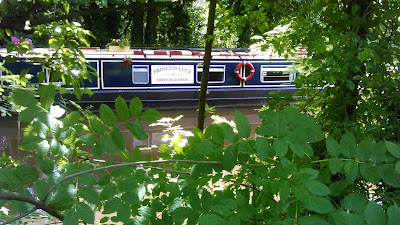 We were very lazy last weekend and couldn't muster the energy to cruise down to Marple which is no distance at all. Instead, we thought it time for a little low stress visit to Whaley Bridge.

We wanted to try leaving Mr Jones on the boat for a couple of hours which we did for the first time on Friday night. We easily got a table at Zayka and can't understand why it is suddenly an empty restaurant when it used to be fulled booked. The food was better than ever and so beautifully presented.

Jones barked a lot as we left but when we got back, judging by the time it took him to get to the doors, he must have been fast asleep in the front cabin in his bed. So this went well given how noisy that tow path is. It must surely be the busiest tow path and is always full of people, and screaming teenagers who seem to traffic between Tesco and the town. 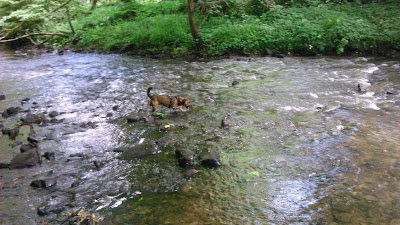 The next morning, after a really good night's sleep, we took Mr Jones down to the sunny river bank where Rocky had played on his pallet.

Rocky loved this shallow fast flowing bit of river and so did Mr Jones who likes to bark at anything that ripples unpredictably. For example, when the boat is in reverse gear Jonesy is most unhappy and barks fiercely at the water, but inexplicably he is fine in the forward gear. 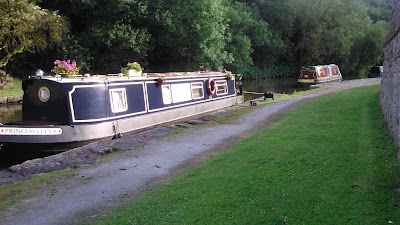 After a trip to Tesco for barbecue food, we moved Princess Lucy to Bugsworth Basin, just to see how easy it is to moor up there and how many people are around. We found a quiet mooring which was on the other side of the A6 but there is nowhere in the basin that you can avoid the constant traffic noise. That said, we enjoyed our barbecue and wombling round the basin. The next time we will be here, it will be to meet up with Sarah and Jim.

We are looking forward to seeing them and Rocky but fear that the greyhound/terrier combo will inevitably spell trouble.
CLICK ON comments (RIGHT) TO POST A MESSAGE Jemma . July 09, 2015 No comments:
Email ThisBlogThis!Share to TwitterShare to FacebookShare to Pinterest
Newer Posts Older Posts Home
Subscribe to: Posts (Atom)