A Wonder of Windlasses

"Wonder" may not be the correct collective noun for windlasses, but it will do for now.

On our December journey from Furness Vale down to Burton on Trent, we had the misfortune to lose two windlasses! The first was lost by the First Mate, and this was due to her negligence and incompetence. Two days later, the second one was lost by the Captain, but this was, well, just one of those things - it could happen to any Captain.

But then Captain actually got a bit panicky, as if this new rate of loss continued, we would be opening paddles with adjustable spanners by the time we got to Fradley!

We were in Rugeley, and whilst First Mate fought with the Christmas food shoppers in Tesco, Captain happened upon a wise man. He appeared on a boat in the mist (don't know his name - but he made fenders and that sort of thing.) Under his cratch cover he had gifts of frankincense, myrrh and windlasses. The windlasses were secondhand, as he had some secret for rescuing them from the deep, probably (I imagine) like trout tickling. 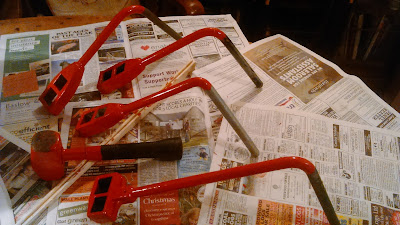 Two for a tenner seemed like a good deal, and Captain went away happy. Although to quote one of the many memorable lines from The Life of Brian: "don't worry too much about the myrrh next time."

But they were green! Now that just seemed wrong. Captain is someone who already spends too much time around locks looking whereabouts in the grass it was that he left the windlass, and green ones would make that even more challenging.

So, armed with some (slightly borrowed) British Rail Signal Red, Captain today set about putting this right. Note the inclusion of the lump hammer, as that too has a very annoying tendency to hide in the long grass.

Why not just tuck the windlass in your belt as we do or be a right dick and get a holster like all the shiney boat (or Daily Wail readers) brigade do. Glad you have posted as the boy and I were getting worried that you had been kidnapped at Mercia or worse seduced by the bright lights.

I think they are splendiferous.
A belt to stick them in is good, if sensibly worn outside one's clothes. A certain other commentor tucks his down his trousers (or more usually shorts) next to his skin, occasioning much shrieking when it's a bit cold. It's my job to warm the windlass prior to first use by arranging it around the exhaust pipe in good time, being careful of course not to allow it to become over heated. This is a small price to pay for never having to work any locks.

Well....how very useful. Now we all know where to shove our windlasses. I actually got one of those holsters in my Christmas stocking but I knew where to shove that piece of nonsense too.