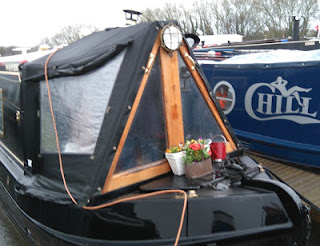 With First Mate away on a jolly in France, Mr. Jones and I thought a few days boat painting would be a good idea. The plan was to paint the handrails and the cratch front.

But we hadn't counted on the weather. Now DIY painting of boats, or bits of boats, is always a trial. There are flies, blossom, leaves, wind blowing other stuff, farmers mowing, it can be too cold, too damp, and of course there can always be rain. This week, though, the problem was the sun and the heat. 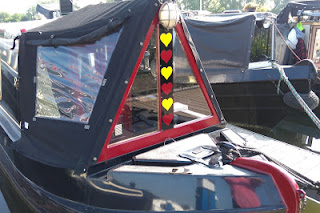 But we hatched  a rough plan. It involved getting up at SIX! and masking as soon as the dew had gone. This was tricky on the handrails as the dew kept down rolling off the roof. Then the idea was to paint before the sun became too strong. As a way of mitigating against this, the unpainted section of handrail was shaded with old bed sheets (at least I think they were the old ones).

Handrails don't look very exciting in photographs, so here is the cratch (before and after). Mr. Jones and I are reasonably satisfied.