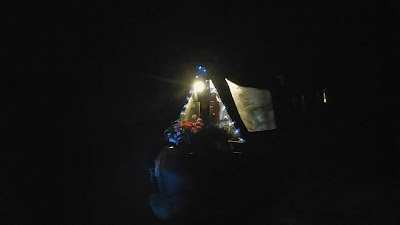 The boat is now back on its mooring at Swanley Bridge. We pushed on yesterday so that we only had a couple of locks to do this morning before swinging into the marina.

Yesterday, we had a steady run from Grindley Brook, impeded a bit as we followed a couple of single handers through most of the locks.

By late afternoon, we were tied up (next to fellow bloggers Amy Jo) for our last night on this trip. It was a very peaceful mooring with no roads or railways within earshot. Mr. Jones confirmed his approval, standing on his hind legs sniffing the air, cocking his head at unknown noises from wildlife, and off course he could also sense, lurking behind the hedges, the occasional monster.

This morning the canal was quiet, so after a leisurely breakfast Captain started to untie. And this is when it happened. In fact no matter what time of day you untie - it always happens: a boat came around the corner, travelling in the direction we would have been travelling in (had Captain untied just one minute earlier.)

"No worries" he muttered, "One boat won't make much difference." He tied up the boat again and the boat passed, but again, before Captain could untie, two more boats (the two single handers) came around the corner. Captain continued muttering, and muttered even more when a fourth boat went past.

This phenomenon is now to be know (for no good reason) as Jones' Law, which states "If it is quiet on the canal, and you think it is a good time to set off, then immediately you reach for any rope a small flotilla of narrowboats will pass in front of you."

Anyway we are all tied up nicely now, and no new maintenance jobs have cropped up. Next month's trip is to Liverpool. Although our route there is going to be interesting.

I think I've spotted the underlying cause in the words 'leisurely breakfast'...