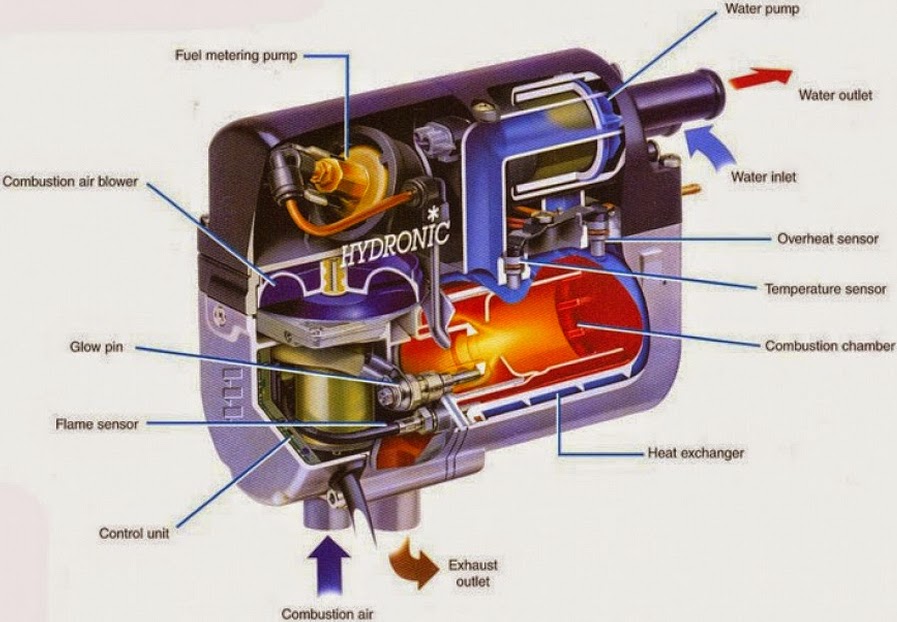 A few weeks ago the Eberspacher (the diesel heater for the water and central heating on our boat) began to fail. It would switch off for no reason and not attempt to restart. This was not good, as at the time the weather was seriously cold, and we do expect to wake up to a cosy boat. It only failed occasionally, so armed with a couple of screwdrivers, a 4mm allen key and a new gasket set I set about giving it a service. Surely the combustion chamber would be coked up, and a quick fettle might see it right?

Not so. In fact the combustion chamber was amazingly clean. This was a surprise as we have had the boat 2½ years and the Eberspacher has been well used. The cleanliness may be due a change in Red Diesel when, in 2011, it became ordinary diesel with colouring in. This meant we all got a lower sulphur fuel which burns cleaner. Well that’s all good then - but it didn't give me any confidence that I had done anything to cure the problem. And I hadn't.

Enter Ed Shires from Four Counties Marine in Leek. He knows his stuff. Most of his work is boat heating systems. So if you have a heater that is poorly, and kicking it hasn't worked, he’s your man. He came to the boat and plugged his tester in. It immediately showed a fault. The problem was, it then showed another fault, and then another fault and after some time Ed found that the fault was the brain of the Eberspacher. The brain, the control unit, the electronic control unit or ECU was failing and as a result throwing out random fault codes.

So, that was that. The options were
(a) Cry into my oil stained tea towel.
(b) buy a new control unit - around £300.
(c) Obtain a second hand ECU or second hand working unit.
(d) Buy a new unit - £700, but with a three year guarantee.
There were other options, but I didn't fancy the one with the hair drier, and it would take some explaining.

Without going into all the whys and wherefores, the THREE YEAR GUARANTEE seemed very attractive, so options (a) and (d) were selected.

The following day after an hour of swearing at the control unit (which I thought may shame it into working) I took a steady drive over to H Bowers at Stoke on Trent to pick up a new unit. The man there was really helpful and by mid afternoon the new unit was fitted to the boat and warming the water.

I was so excited I took a video of it. I haven’t posted it anywhere in case it goes viral.

We love Ed Shiers - he is the essence of ab fab! If it's permissible to be ab fab and a super hero, he's both! Cheers, Marilyn (nb Waka Huia)

Surely the most important thing is to make it nice and warm for Mr Jones?

Thanks for the link to Ed. He sorted out my Webasto problems in short time yesterday.
Ken nb Cleddau