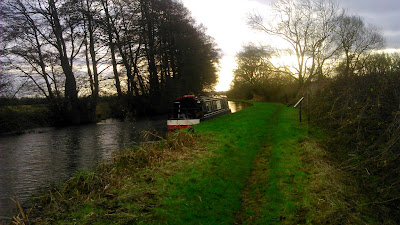 We awoke this morning in the middle of nowhere. There was a towpath and some fields - you may have been there. The weather was predicted to be very heavy rain after lunch, so we cracked on to Rugely, and tied up as the heavens opened.
Mr Pearson in his canal guide says of Rugeley, "It is difficult to escape the impression that life here is lived on the cheap." First Mate visited both Boots, Poundland and ambled around the town in the rain. On her return she said, "That was a load of wank." So not a lot of favourable comments thus far.
What it is good for, is Supermarkets close to the canal. Tesco and Morrisons are in fact separated only by the canal, and it will be (on the 23rd) our last chance for food shopping before Christmas.
Tonight we will give Rugeley a second chance eating out at "Terazza." It is number two for the area on Trip Advisor.  However it may well turn out to be like coming second in the beauty competition where the pig came first.
We are possibly being inconsistent, after singing the praises of an equally run down Stoke, However, our views may be unduly coloured by the incessant rain, and paddling through copious mud on the tow path.
First mate says it will all look better after she has straightened her hair and had a glass of fizz.

Rugeley used to have an old fashioned hardware shop, but it's probably gone. When we moored at the Cheese Wharf at Kings Bromley Rugeley was the nearest metropolis. That is why we were so impressed when we first went to Cannock. (Actually, I do quite like Cannock, and I love Wolverhampton).

At least your boat can get in to the bank.

Unless of course they stocked Phillipe Stark :)

Don't know where you are heading for tomorrow, but The Plum Pudding at Armitage is excellent for meals, and nice moorings. Probably a bit late to tell you this, might have been better than La Terrazza. Anyway enjoy your Christmas wherever you moor.