Work Work Work (and then some fun ) 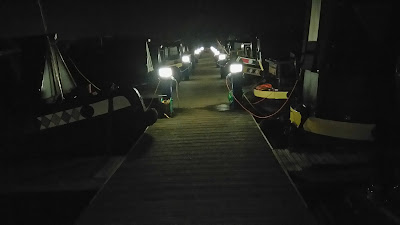 We have been very poor at blogging lately, and it is true that we have done no boating since our August Birmingham trip - unless you count a hop over to the pump out. We have been enjoying our new marina at Kings Orchard. We have been there regularly exploring our Staffordshire roots in the flat arable countryside that surrounds the canal. We have also had a few credit-card busting jaunts over to the massive Ventura shopping Park at Tamworth and taken Princess Lucy (and her mum and dad) to Qmin our new favourite Indian restaurant in Lichfield. Whilst Captain will tell you it's been all work work work, this is slightly misleading.

The time where we might have been cruising has been spent labouring both at home - plastering and decorating, and on the boat -  where Captain has made a determined effort to reduce the length of the job list.It is true to say that he is definitely running out of steam in this department and has had to dig deep. The  whole point of buying a newer boat (she's five years old) was to cut down on the need for restoration work but it's amazing how much 'adjustment' and 'correction' have been necessary to make her as warm and comfortable as our old boat. 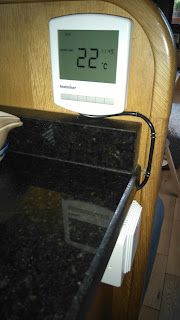 The first jobs tackled was those snagging matters that should have been dealt with on, or shortly after, handover by the boat builder five years ago!

So now you don't need the corridor lights on to be able to put the bathroom lights on. And whilst you are in there you can get your hand under the basin tap - which was practically touching the side of the basin. And you can fill the water tank without it leaking from the breather pipe connections (which had never been connected properly).

New 12 volt wall lights, lamps and kitchen down-lighters have been added, as most of the original lighting was just rows of LED ceiling lights, which felt a bit like sitting in a railway station waiting room with the only alternative being to sit in the dark. .

This last week Captain has been busy dragging the Webasto heater into the 20th Century. It was fitted with a basic on/off switch and a crude timer that was of little use. Now it has a programmable thermostat that can be set to do nearly anything!

First Mate has not been idle: she has overseen the re-covering of the fixed seating cushions, and following our July purchase of a full set of boat curtains from John Lewis (which were rather poorly finished), a short letter of complaint resulted in John Lewis putting the matter right, and First Mate recently collected a complete new set. So we now, by chance, have a wash and wear opportunity because boat curtains do get grubby.  By removing the entire cratch, we somehow squeezed a new white leather IKEA sofa into the saloon and added a new rug. It's looks quite different to when we bought her. Next year we might have her name repainted to Princess Lucy No.2 and maybe shift some radiators around and move the TV. For now we are very happy with how she's shaping up.

Mr Jones, the terrier, has been enjoying more freedom as we slowly grow in confidence with him. We have been letting him off his lead a little more, taking the risk that he might bolt at any point. Last weekend, he heard a shot and left his ball, shooting off to investigate, but he did stop and come back when called so this must be progress.  However, in other areas his rehabilitation has gone backwards.He took a violent objection to another dog in the local pub at Kings Orchard (The Plough) and barked the place down. Whilst other finished their meals, Captain had no choice but to sit outside with him - in the dark and the fog. It is certainly seems like  few steps forward and then nearly as many back again.

So we have been very busy, (I haven't even mentioned replacing the cracked stove glass, the sump pump, and the main batteries), but the list is thinning out, and we plan to get out onto the cut in November and again for a week or so over Christmas.

And we will wake up nice and cosy thanks to the clever thermostat.

That makes me think... does anyone make a 12 volt teasmaid?