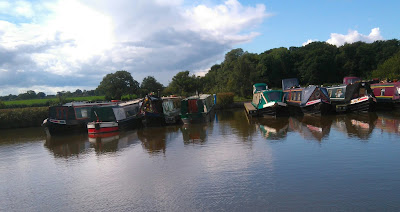 On Wednesday (6th September) we turned the corner straight into the first of four locks which begin the Llangollen branch of the Shropshire Union Canal. We pootled into our new marina at Swanley Bridge wondering if it was it named after the numerous swans and signets that greeted us.  Despite a reasonable breeze Captain managed to reverse with first mate doing her well worn impression of a towing shire horse hauling all fifteen tons onto its new mooring by a combination of skill and brute force. After oiling the squeeky jetty shackles (with spray olive oil) we were all tied up nice and quiet.

And quiet it is after Kings Orchard. It seems so much more open. We attribute this feeling to there being just one point of security in the shape of an electronically activated vehicle barrier into the marina and other than that we are free to roam. There are no locked jetties or locked toilet blocks and our boat (3rd in from the left of the row) is along side and tucked behind a hedge so it feels private. It's all very well kempt. There were a few people about but there was none of the Brummie yauping we have become accustomed to mooring up to. Perhaps we will miss it. Come to think of it, there was usually someone around to catch a rope or hurl an insult about the Captain's steering. Not so at Swanley.

Captain then decided to fetch the car from Kings Orchard Marina. So a delayed taxi got him to Nantwich railway station for a delayed train and after a change at Crewe he arrived at Lichfield, where with no waiting taxis, he legged at across fields for half an hour to the marina and the car. The dark, busy and fast M6 was a bit of a shock after a fortnight of canal speeds, but he survived and arrived back in time for a late and slightly singed dinner at 9.15pm. It had been a long day and the giant couscous turned out to be a mistake. Any foodstuff with 'giant' in the title is probably a mistake.

Our next serious jaunt will be to Chester on the run up to Christmas with maybe a cheeky couple of nights up the Llangollen before that.

Your articles are very useful. This was a wonderful site and I really enjoy it the data you shared.