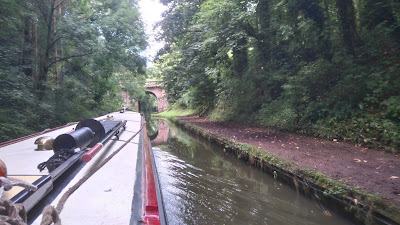 It's a mellow Sunday morning aboard PL 2. A bit rainy, but with the heating on and Cerys on Radio 6, a late breakfast of yoghurt and fruit, it's cosy. I am making up for the fact that I have so far failed to write a single blog this trip. Captain is elsewhere and I have stolen his laptop. Here is my chance to beat the early bird who has usually posted before I wake. So nothing here about flanges or smashed dollys or replacing the batteries or the fact that he nearly cried when, naked as the day he was born, and about to step into the shower, the whale gulper failed. I sprang into action and found a chandler's just up the cut, but moments later, he discovered it was just a wire that had come loose and was easily fixable. So for the moment, everything seems to be working as it should.

I have come over a bit Gerard Manly Hopkins over the last few days especially as I watched a massive bird of prey circling the canal. It made me think of his poem celebrating the power of 'The Windhover' written in May 1877.

'As a skate's heel sweeps smooth on a bow-bend: the hurl and gliding
Rebuffed the big wind. My heart in hiding
Stirred for a bird, – the achieve of, the mastery of the thing!'

The cut has been dramatically beautiful: we have never been on the Shropshire Union before. It's wide, lush and feels laid back. Chugging along, you feel as if you are miles from anywhere. It's what makes boating occasionally mystical. I am glad that this feeling has been restored because we had a few days on the Staffie when it began to feel a bit stressful, like being stuck in umoving traffic on the M25 (well not really but the analogy will have to do). I guess we have been spoilt in mostly having the canal and locks to ourselves. On this end-of-summer trip to our new marina, we have been at the end of a long queue for locks, failed to find moorings for the first time in our five years of boating. Boaters are usually lovely but people seemed grumpy by canal standards.

We completely missed our stop at Goldstone because there was just nowhere to moor for miles. As it happened I have fresh food on board and a middle-of-nowhere mooring is fine because there is always the fall back of a reasonable dinner if the pub fails to materialise. Unlike the two youngish men who also failed to moor up for The Wharf Tavern for food. They told me the day after that they had feasted on some delicious Pot Noodles. Nothing wrong with Pot Noodles, of course. I've lived on them at a certain time of my life before I had heard of muesli or mange tout.

Last night was much more normal. We tied up nicely on the aqueduct above the river which runs under the canal. We are high over the pretty Georgian town of Market Drayton. For his early evening walk, we took Mr Jones and ambled in for dinner at the comfortable and very dog friendly Joules brewery pub - The Red Lion. We ate excellent burgers, pies and Jones had the pickings of a tin of various dog treats. It was a sunny all day yesterday and the evening was gorgeous. It is noticable that almost exactly on September first, we felt the air cool and the earth slowly tilting away from the sun.
CLICK ON comments (RIGHT) TO POST A MESSAGE Jemma . September 03, 2017
Email ThisBlogThis!Share to TwitterShare to FacebookShare to Pinterest