In spite of our pessimism about making any progress towards Chester today, we have cruised for 4 hours and done 6 locks in winter sunshine. it was still freezing but the sun lifted our spirits and cheered us on.

The Hurleston contractors had cleared up and cleared off by lunch (Friday pub time?) and we were through the 4 locks by 2.30. This might be naive but we expected everything to be ship shape in the lock chambers. Not so. After 3 weeks of repairs, the Hurleston locks are leaking badly, one of the gates was dragging along the ground, there was a tyre behind a gate, and a ground paddle out of action. 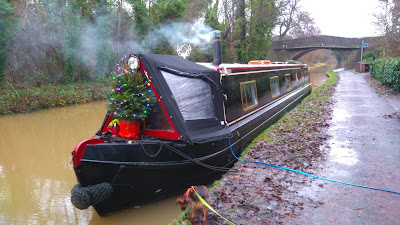 Then we were the first boat through the similarly repaired Bunbury double lock flight, and we nearly sank the boat. At the bottom of the lock the boat became stuck on something significant enough to tip us up. With First Mate, Jones and the boat all in peril, Captain sprang to the paddles thinking he could drop them quickly. Again, not so. They are the only paddles in the system that wind down just as slowly as they wind up. The boat tipped sideways so far that it eventually slid off the thing and launched itself into the middle of the broad lock.
We are seriously unimpressed with stoppages that seem to have made things worse and more dangerous than before. We survived but it was a scary moment.
Tonight we are safely moored just under Tilstone Lock and have just had a home made curry for dinner. All is well but we will have to see what traps have been laid in the newly maintained Beeston Locks.