Oh the weather outside is frightful ...

As with many of our ideas, they are often formed at a distance from the proposed outcome. Cruising for three whole weeks around Christmas had its appeal at the planning stage when the weather was warmer, the winds calmer and the nights longer. The imagined scene was of cruising on bright, crisp mornings, rising from the cabin to a light frosting of snow.  And cosy evenings, mulled wine in hand, toasting crumpets on a log fire. Then there were the long, fresh, breezy walks with Mr Jones to the nearest pub. It all added up to something that looked like a Christmas TV advert. 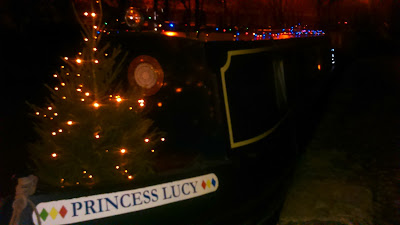 Oh dear. How reality bites. For weeks now, we have experienced freak storms, gales, continual rain and the plan is now looking, even by our standards, rather foolhardy. Especially with large parts of the North suffering from major floods. What is the chance of us getting onto the Trent? We face being marooned in the middle of nowhere.  But the alternative was infinitely more scary. Staying in, safely tucked up watching 'Homes Under the Hammer, or the Christmas Special of 'Flog It.' Only time will tell if we have made the right decision.

Last weekend we ventured out in 25mph winds with 50mph gusts. We only went a couple of miles to Whaley Bridge for a cheeky overnight curry where we met friends Tracey and Mark. It all worked well, and we also found time to decorate the boat, including a real Christmas tree that withstood its first battering. We even had a bit of a dance around the saloon after a couple of sherries.

The boat is stashed with wine, logs, presents and chocolate. Brian (of Alton) has topped up our diesel and filled the coal bunkers. We are all set for a Sunday afternoon start but not without trepidation.

The route is from Furness Vale to Marple on the Peak Forest Canal, to Stoke on the Macclesfield Canal, to Burton on Trent on the Trent and Mersey (briefly crossing he Trent) and finally into Mercia Marina for two or three months after Christmas. God willing.

Have you let that dog grow soft?