Dreamed a Dream, by the Old Canal

On Monday afternoon, assisted by our neighbours from home, Sue and Rod, we left Birmingham Centre and headed off down the 13 locks in the Farmers' Bridge flight. Sue and Rod had stayed over in the city the night before, and clearly had far too much fun, so we thought a flight of locks would be good therapy. 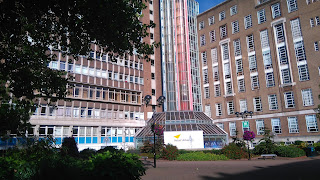 We took our time down the flight, chatted to passers by, and gawped about at the layers of history. We met only one boat, and just made it past them in one of those very short pounds, and despite not rushing, we were still down in 90 minutes.

We tied up (again) in Aston Science Park, where First Mate served dinner on board, before Sue and Rod went off for their train.

This morning, with temperatures of 27 forecast, we set of first thing (10.05). Before that, Captain walked Jonesy around Aston University where there is a fair amount of green space for him to sniff. 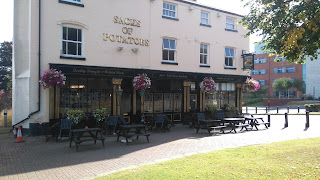 Aston was buzzing with students, although not the normal ones as they are not there yet. But they looked young and keen, and Captain remembered the hope and excitement that education can give people, as it did him. Sadly a First Degree now guarantees nothing and those that do get jobs must (like the Captain) become quickly disillusioned with the bullying and aggressive culture of many workplaces.

Captain spent many days and nights at Aston, when studying for his OU degree. And a few hazy nights in the Sacks of Potatoes. He looked through the stained glass windows this morning.

Was that his old mate Sean, hungover and failing to tie his shoe laces? Was that Carol-Ann and Debbie C snogging on the sofa? Could that be Robin Wilson (Harold's son)  stood at the bar?

No it wasn't, not this day.

Time to cast off.

Aha, a chance to record my Wilson anecdote for posterity. When I was at Huddersfield, they had an annual Harold Wilson lecture in honour of the memory of the town's most famous son, and his widow was the guest of honour the year I was there (and possibly every year, I don't know). It was all organized by a lovely Professor of Politics, and when she saw an elderly lady accompanied by a somewhat shambling middle aged man, she approached and asked 'Are you Mary Wilson?' To which came the imperious reply: 'I am LADY Wilson, and this is my son PROFESSOR Wilson'. Later we had dinner and I sat opposite the Bishop of Wakefield ('do call me Stephen')