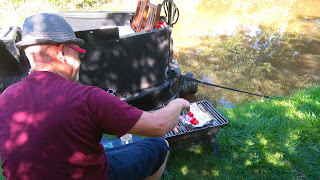 We have been a rather poor in blogging, but the Bank Holiday Monday plan worked a treat. We stayed put and had an easy morning, a mid afternoon barbeque. This gave us a good vanatge point to quiz the boaters coming down as to the length of the lock queues. We eventually set of a bit after half four.

The queues had gone and we had a very pleasant evening cruise to somewhere near Acton Trussel. (No I had never heard of it either.)

We assumed that at the end of the Bank Holiday all this nonsense would disappear, but the Tuesday morning proved our assumptions wrong and we queued too much, eventually arriving at the somewhat uninspiring Penkridge and the seriously underwhelming Boat Inn. 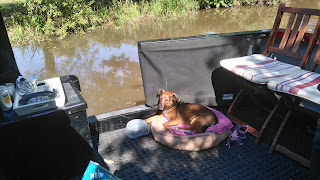 Yesterday (Wednesday) seemed calmer, and we are now tied up at Coven Heath. Where that is we do not know, and where we are in relation to the real world is a slight mystery. We keep getting a bit (too) close to the M6, the M54 and electrified railway lines.

Today we will leave the Staffs and Worcester Canal and start heading North on the Shropshire Union. Well that's what the spreadsheet says.

Perhaps like the Spall's I should carry a decent road atlas too.

Just caught up with the blog. Glad you have survived the bank holiday rush! Well the weather was rather good for 'messing around on the river ' well canal. So perhaps there were lots of day trippers. We had a fairly quiet weekend just walking locally. Furthest we went was Kedleston Hall. Busy near house but 5 minutes walk away we hardly saw a soul. Enjoy rest of your trip. Cx Will see how I fare with proving I am not a robot!!!?