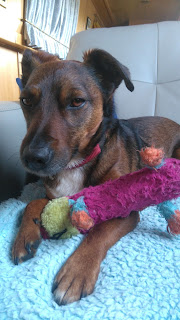 We really knocked ourselves out yesterday and cruised for a full hour and 20 minutes with no locks. Taxing but we just about made it from our lovely rural mooring to Rugely.
On our morning walk we met a very wise woman, a solo boater who lives and works at Fradley on her boat 'Don't Panic'. Jones was very frisky with her Cairn terrior Bonny who appeared to be dragging round a piece of slim cord and a triangle cut from a piece of Fablon bearing pebbles.
Mystified, we had to enquire as to its purpose. She told that it kept the runaway near her and the boat and that it had worked successfully for 6 years. Bonnie, like Jonesy, is very independent and thinks nothing of running off after a rabbit and had once  disappeared for 10 hours! Even though this string is not attached to anything - it fools her. The bright patterned fablon helps her owner see her if she burrows into some undergrowth. Genius. 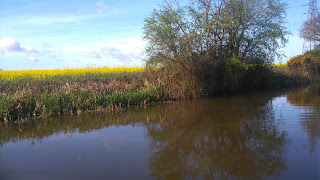 We arrived at Rugely in the afternoon sun. It still has a Boots, a Wilcos and a Morrisons. We had a delicious dinner at Terrazza. This is an old fashioned Italian with fantastic service and food. After the contempt heaped on us by the staff at The Plough, we really noticed the difference and it was much appreciated. Perhaps the Plough could send their rather superior bearded hipster manager for a refresher training course to Terrazza?
CLICK ON comments (RIGHT) TO POST A MESSAGE Jemma . April 12, 2017
Email ThisBlogThis!Share to TwitterShare to FacebookShare to Pinterest

I love canals and I love dogs. Your dog especially because he resembles my own bitch, Lucy. Brownish, short legs, of no known breed. Very affectionate. Gosh, haven't we been enjoying good cruising weather? My local canal has come alive at last and after over a year of blockages boats are passing through. I compulsively ask where they are going, where they've been. I've left it too late in life to start this now, but I think I'd have made a good 'boat spotter' (as opposed to train spotter) with a notebook full of names and where seen, heading where. I hope people realise I'm just nosy and not some kind of stalker!
Heather / pedalboats.wordpress.com