Off to Stratford on Avon

Yesterday we set off on our summer trip to Stratford Upon Avon. At our usual daily average of 3 hours a day, it will take about 8 days. 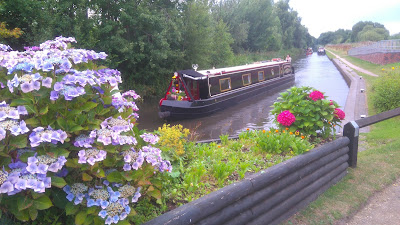 However, them canal people have gone and dug up part of our route: The Garrison lock flight is closed on the Birmingham and Warwick and so we now have an alternative, but longer route – going up through the Aston flight and then through the Ashted locks (and tunnel).

To keep to our schedule we planned to catch up some time on our first day, and planned a mammoth 4 and a half hours. But then at the end of the cruise, there was a moment of confusion and indecision, and we went a lock further than planned. This extended the time to 4 hours 45 minutes and by that time we were exhausted. Hopefully these rough notes will tell the tale.

But we had reached the Dog and Doublet at Bodymoor Heath. We were a little late for our table and as we dragged ourselves up the steps into the bar (on our hands and knees) I think they took pity on us.

And it was wonderful to be there, but given the circumstances, I imagine the food and beer tasted better than it was.

They gave Ricky a leftover steak pie in the Dog and Doublet. It's therefore his second favourite pub after the Nelson, where they let him sit on the sofa.