Some days just go right and some don't.

Some days just go right. Take Thursday when we were blessed with help in every lock, sunshine for all our walks and even a safe field for lots of ball play. Cruising past fields of rolling corn, it felt good. Then there was the unexpected delight of finding that The White Horse was dog friendly. It's a very smart, trendy, candle-lit place (a Vintage Inn) and we had walked past it last year without dreaming that they would allow dogs in. Not only that but the staff positively get down on the floor, and give them a really special welcome (ignore the last blog. The Captain is suffering from delusions). We had planned to eat on board but this is now one of my new favourite dog friendly non scuzzy places to eat. No chance here of having to humour the 'cream faced loon' (Shakespeare knew how to describe people alright) in the last pub that remonstrated with us for messing up the order of sauce sachets. 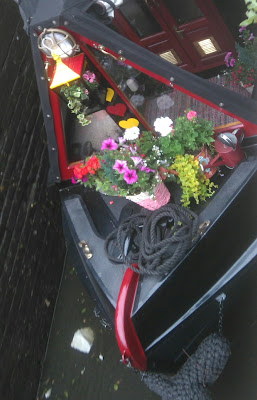 Yesterday (Friday), not so yin and yang. We were promised very heavy rain and with 14 locks to do, this made us anxious to get off early - or early for us which is ten o'clock. However the rain didn't really materialise whilst we were doing the locks but we had a quite unexpected battle with the wind that sent the boat crashing a couple of times. We made very poor time due to happening upon a boat that was towing another little boat which had to be hauled into every lock by hand. This was frustrating and made our day drag on.

We are now tied up in Aston and arrived to the most almighty din from heavy construction traffic: cranes, diggers, tarmac machines and every one of them had some sort of screeching alarm. They seem to have packed up for the night but it is now raining quite hard and is gloomy. We are tied up early enough but knackered and there is no where really to venture out to. So it's a shower, followed by a nice dinner on board, a glass of wine and a few candles might banish the drear.

Today we face the Dickensian Ashted tunnel which begins our descent into a satanic lock flight and out of Birmingham.

Hello again! This is my fourth attempt. Hope you are having fun tho it sounds as if you have had a few hiccups. Are you behind schedule with having to reroute? We shall still come to Stratford as planned and try and catch up with you somewhere! Hope you get this! Cx