Who Pays the Ferry Man

This is our sixth day moored on the pristine park that hugs the River Avon. We are loving the ever changing scene out of all of our windows.  The river view is fascinating and busy with craft of all imaginable types. Hanging out of the side hatch, people pass by and say hello in everything from skulls to kayaks, to stripey jumpered gondoliers (surely they must be misplaced from the Venetian Lagoon). There are trip boats, rowing boats and last but not least, there is always the antics of the historic chain ferry.

The regular overseer of this plodding craft is curmudgeonly and seems to spend much of his time shouting at rowing boats or blowing a whistle at the trip boats signalling for them to slow down. First mate has set various visitors, including Chrissie, the challenge of getting a smile out of him. All failed until today. The gradual charm offensive mounted by first mate eventually paid off when he wished her a good day on the way out and waived the 50p crossing fee on the way back. Boom! We are in! Stratford has accepted us as one of its own.

We have had good food out with our lovely visitors eating twice at the excellent Vintners and once at The Pen and Parchment, Keys and Kitchen and the Bear at the Swan. We have done none of the tourist things. No theatre or visits to Shakespeare's this and that. Unlike our cultured neighbours Rod and Sue, Anne Hathaway's cottage failed to lure us in as did Mary Arden's. 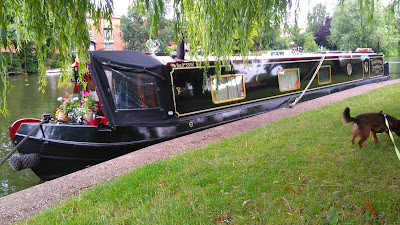 Chrissie and Chris's attempts to take the open top bus tour didn't do much to encourage. The tour was aborted because of heavy traffic after they had crawled for thirty minutes down a busy road. The rain poured down and when they peeped out into the open top when the sun appeared, they were almost decapitated by one of the many weeping and romantic willows that fringe the streets of this place.

Even the willows have had a serious hair cut today as the park received its daily make over involving rubbish collection, grass cutting and general prettifying for the hoards of tourists that seem to enjoy its delights. We are getting to know the rhythm of this place in a way that probably can only be done from the river. This is its life blood supporting so many theatrical and non theatrical activities.  We find that we grow to like Stratford very much.

Loved the blog! Made us laugh! Please keep us updated on the progress of your relationship with the ferry man! Has a lovely time. Thank you. Enjoy the rest of your stay. Love to Mr Jones. Cx