Alrewas village looked very pretty today in the sunshine as we left for our 8 lock climb through Fradley to Handsacre. In complete contrast to the past few days, there were other boats and people, men actually, generally hanging round offering to help out at locks. Second mate even steered in and out of a couple. But then bottled it given the presence of an audience and reverted to lock duties.

All was going well until the sheer welter of conflicting advice became all too much. It seems that everyone has a vital tip to pass on.  The best thing she learned was from watching an experienced woman boater (and a loner too) who just breezed through the last lock at Fradley hopping on and off and nudging the gate open with the front fender. She didnt feel the need to tell us how to do it but showed us the way.

Later we met Jim and Sarah on the tow path and they brought fantastic buns, considerably bigger than any we'd seen for a while. We had a drink in the Crown and an enjoyable dinner wirh them in The Old Peculiar They brought Jem a gift which establishes her narrowboat dog status. She is very proud. 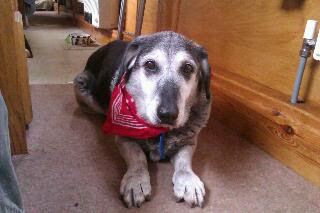