"The train is now cancelled," Peter said. "There is a bus though, a 199 that goes to Stockport." We walked up to the main road to the bus stop,but there would never be a 199. Snow at Buxton had stopped everything.

The plan which was, admittedly, a little complicated, was to leave Jemma and the crew at Pillings Lock, Drive to Furness Vale, drop the Defender off there (so it was there for our arrival in Lucy Belle.) Then catch trains to Stockport, Sheffield, and Loughborough, and finally a short cab ride back to the Marina.

The journey across the Peak District to get to Furness Vale had been interesting. The road between Tideswell and Sparrowpit resembled some sort if post apocalyptic scene, with abandoned cars, cars perched on stone walls, people stuck, and many broken down vehicles (and people). I pressed on, with a single mind, a focus, a goal .... OK, selfishly, and ignoring all the crying and injured families at the side of the road. Not that it was always possible to see the road, or even know where it was.

So on arrival at Furness Vale, I thought the diffiicult part was over.

"We could walk to New Mills Central station," Peter suggested, "It's about a mile and a half. It's the other side of the valley and a completely different line."

I had only just met Peter at the station, but I trusted him. About 4 miles later, with cold and wet feet (the waterproof boots are not) we arrived at the Station, and Peter caught his train to Manchester to connect with the "Dewsbury Ale Train." At least I hope he made it in time. 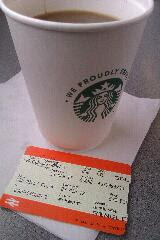