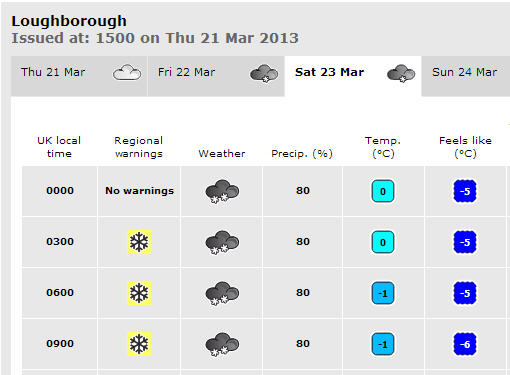 Today we reminded ourselves of the reasoning behind abandoning the Christmas plan to move Lucy Belle from Pillings Lock to Furness Vale: We thought it would be better to wait for the much improved weather of the Easter period. I am sure that the decision was made in light of the best possible information available at that time. After all, this time last year we experienced freakishly high temperatures of 24C. Certainly it seemed like the right decision. But looking today at the Met Office forecast for this coming Saturday, the day we were to begin the voyage, the plan perhaps seems less sound. Today's forecast is for much colder temperatures than we had over Christmas, heavy snow, and a wind that will give a wind chill of minus 8C. We do however have longer days, so we can now enjoy the cold for longer!

Sunday morning is the new start date. All will be good then. Really, it will.Honest. And perhaps all the jokes about Shackleton were a bad idea.

Jemma's new wonder drug "Metacam" perked her up to the extent that she "over did it" and we (and her vet, Peter) think she has maybe hurt herself running about too fast. Jemma saw Peter today, having developed a much worse limp in one (or both?) of her back legs. Jemma has seen Peter before, but the last time was in March 2007, and this was a great reunion.

It was a sunny Sunday afternoon and Jemma had been chasing a rolling stick, high on a hillside above the river Wye in Monsal Dale, Derbyshire.

When we found her she had been carried across the river by a walker - he was wet through to his waist, and he held Jemma in his arms, her left front leg hanging limp and smashed. Peter operated the following day and after a few week's she was up (and running) again.

Today Peter recommended a week or two on a narrowboat as the best convalescence, with plenty of time sat in front of the stove, frequent but short level walks on towpaths, and occasional visits to pubs.

We are off up the Port on Monday. It certainly looks cold with strong easterlies adding to the chill factor. The good news is that it won't snow so much or possibly at all, just rain better by Good Friday it appears. Try weather web for the details.