The Ducks have got the Guns!

Good progress today, and passing through Wychnor where the T&M and the River Trent  briefly merge, we really did say goodbye (and good riddance) to the Trent. Jemma hates going through locks, all that banging and whooshing disturbs her nap time. She's taken to trashing her bed in protest. We are trying to ignore this bad behaviour.

The day began with a visit from Stu's family from Burton bearing Cava (people have been so very kind) we thought about drinking it but as it was only 10 am, opted for coffee. They steered the boat out of Burton and helped with the first lock of the day. We dropped them at Dallow bridge and we continued on our way. 5 more locks were to follow and more snow. We moored in Alrewas and thought our troubles were over but had no sooner lowered the gang plank than we were being mugged by a vicious gang - of ducks. We've locked the stern doors and are in hiding until it is safe to venture out. 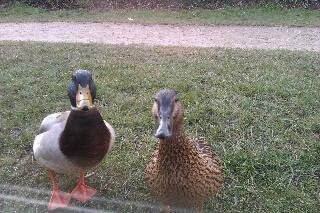 Ah! ducks are but mere whimseys, wait till you encounter SWANS - they shall not pass has nothing on them! Good luck today