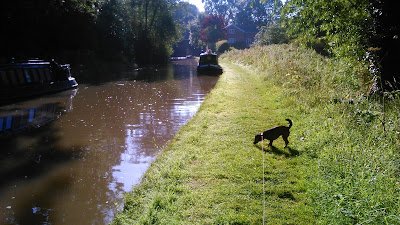 Yesterday the Captain's sister and her husband paid us a visit in Bunbury, and as they often do they brought stunning weather. We sat on deck at the bottom of Tilstone Lock and after pre-dinner cocktails, dined out at the impressive Dysart Arms. This is a converted flagstoned farmhouse in the cinematic Cheshire village of Bunbury. We had booked for 4 adults and one terrier.
But Mr Jones wasn't just tolerated, he was provided with his own bowl of water and three doggie biscuits on a napkin. It was the best service he's had anywhere. He has requested that we go back on our return leg. 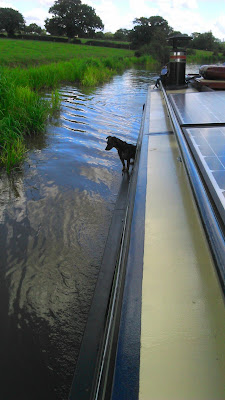 This morning began again with clear blue sky and we mooched to, and past, Beeston Castle in one of the prettiest stretches of canal we have seen.
The plan was to stop for the night near, at, or in, The Cheshire Cat, but, conscious of the preparations to be made in advance of our weekend guests, we pushed on down the last 5 locks into Chester. 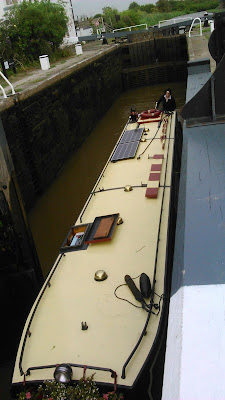 Weary but triumphant, we tied up outside the Barton Rouge Indian restaurant. The aromas were enticing. We chatted to friendly waiters and chefs larking about outside, who laughingly offered to deliver. So we cracked up and ordered a take-away (or take-out, or carry-out, depending on where you live). This was a first for Princess Lucy because we don't do takeaways preferring to either cook or eat out. However, it seemed to be rude not to. The food was good and it was a very easy option given how tired we are.
The restaurant kitchen's extractor fan is directly facing our boat, so we may need to adjust our position. Or we could just drink it all in.

* We did move - but not until the fifth night! For some reason, the relatively empty Chester visitor moorings had gone from nearly empty to nearly full, but we found another spot. I then saw a boat that was clearly looking for somewhere to tie up and suggested they could go where we had come from. I did shout warning him about the kitchen extractor fan. A passer by assumed I was being racist - and commented "Ah - you don't want to live next to them then!" I was speechless, and still am. But I must admit to being restaurantextractorfan-ist.