Yesterday we left Rode Heath in full sunshine just before noon. We knew the afternoon weather forecast was heavy rain, so we set off  to tackle the 13 locks. The rain was not so bad, except for the last two locks in the Red Bull flight, where we did get soaked. Our spirits took a dive when we saw the queue to go up and rain made everything difficult, slippery and especially dangerous.

After Red Bull, the rain cleared, and it was then a gentle hour's cruising to Scholar Green and to dinner at the friendly Rising Sun.

Today was less ambitious, with no locks and under three hours cruise to the bottom of the Bosley flight which we will tackle tomorrow. We stopped off and walked into Congleton to explore somewhere we have only passed through before. 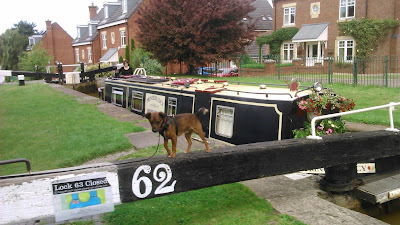 It's an interesting town with some attractive old buildings. The Weatherspoons is in a particularly historic and impressive former hotel/bank. The ladies toilets still boasts an open fireplace which probably hasn't been lit for many years. The town is lined with charity and bargain basement outlets. Symptomatic of many former trading towns, Congleton has retained its High Street character, but has failed to keep any proper shops. It becomes a self fulfilling prophecy that pushes its residents out to shop in the bigger cities and malls.

We are cruising now towards The Dane Aqueduct having rescued Jonesy. He was trusted off lead on the stern for 5 minutes and in this time managed to jump ship in a bridge hole to have a go at another dog. Captain abandoned the tiller and scooped him up in a flash. Jonesy is in bad books now.

Captain's spreadsheet shows we have completed 106 locks on this trip so far. No wonder we are all wasting away! Tonight we will debate, again, whether we should have a night off the alcohol. I think the discussion would be better had over a drink. Captain's argument is that we need the calories.